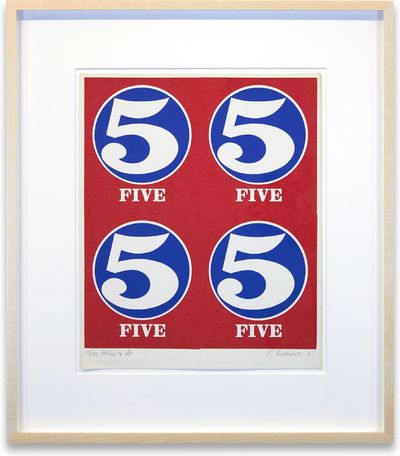 by INDIANA, Robert
Np: Np, 1965. Fine condition, framed.. Screenprint, 11.75 x 9.5 inches. 18 x 16 inches framed. An early version of Robert Indiana's "Number 5" from his Numbers series. SIGNED by Indiana, dated 1965, and inscribed for: "Mimi and Abe." The Adlers were longtime LA gallerists. This early version of the "Number 5" was created by Indiana as an insert, to be housed inside the folding announcement card from his Rolf Nelson Gallery exhibition in May-June, 1965. Though each announcement had a single "Number 5" print, this example is an uncut sheet of four 5s, each 5 x 4.25 inches. The larger, better-known version was executed in 1968 in an edition of 2500 unsigned copies. (Inventory #: 25519)
$3,500.00 add to cart or Buy Direct from Harper's Books
Share this item
Harper's Books
Offered by