Opticks: or, a Treatise of the Reflections, Refractions, Infections and Colours of Light. The Fourth Edition, corrected. 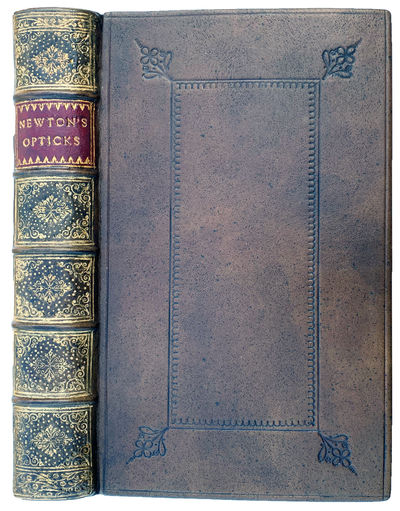 by NEWTON, Isaac (1643-1727).
London:: Printed for William Innys, 1730., 1730. Sm. 8vo. [viii], 382, ads. [2] pp. 12 engraved folding plates [Book I: pt. 1, 5 pls.; Book II: pt. 2, 4 pls.; Second Book: Pt. I: 2 pls.; Book III: 1 pl.]; minor ms. annotation on p.1 [GT-xxx :: ownership initials?]; margins show some minor worming. Antique-styled modern blind-ruled full calf, raised bands, massed gilt stamped spine, gilt-stamped red leather label, mild foxing. Very good (in a fine binding). NEWTON'S FINAL EDITION OF THE OPTICKS: Fourth edition, corrected. "This is the final edition, revised by Newton." "This new edition is carefully printed from the Third Edition, as it was corrected by the Author's own Hand, and left before his Death with the Bookseller." – Advertisement. "Newton's contributions to the science of optics: his discovery of the unequal refractions of rays of different color, his theory of color, and his investigations of 'Newton's rings,' to mention only a few of the most noteworthy: place him among the premier contributors to that science. . . . Today we recognize that his work on optics offers unique rewards in its exciting, innovative conjunction of physical theory, experimental investigation, and mathematics, and in the revealing glimpse that it provides of a crucial period in the evolution of experimental science." – Alan E. Shapiro, The Optical Papers of Isaac Newton: Volume 1, (1984), p. xi. / This edition contains the full set of 13 Observations [Book II, Part IV], and 31 queries or questions [Book III, see p. 350]. As written by the respected Newton scholar, Richard S. Westfall, "From the perspective of natural philosophy, the 'Quaestiones' were the first of the series of speculations that form the warp on which he wove the fabric of his scientific career. Throughout his life, his speculations turned on a limited set of crucial phenomena which seem to have functioned in his eyes as keys to the understanding of nature. Nearly all of them appear in the 'Quaestiones.'" – Westfall, p. 96. / "Whereas the Principia is a mathematical work involving intricate geometrical relationships and only a handful of major experiments, the Opticks overflows with detailed accounts of reflection and refraction, the separation of white light into the colors of the spectrum, the manner of the eye's operation, the formation of images by lenses, the colors of the rainbow, the construction of the reflecting telescope, and much more. Unable to contain himself, the author introduces many subjects that have little or nothing to do with the behaviour and analysis of light: metabolism and digestion, the circulation of the blood, the creation of the world and the Great Flood of Noah, the scientific method, even the images that haunt the dreams of madmen. Moreover, Newton wrote the Opticks in English, making its contents accessible to a far wider audience than the Principia, whose classical Latin had stymied many potential readers. His friend John Locke, who had only months to live, was baffled by the earlier work, but read the Opticks 'with pleasure, acquainting myself with everything in them.'" :: Gale E. Christianson, Isaac Newton, Oxford University Press, 1996. REFERENCES: Babson, 136 (v. I, pp. 68-9); Gray, Newton, p. 37. See: Richard S. Westfall, Never at Rest, p. 96. (Inventory #: S13834)
$5,000.00 add to cart Available from
Jeff Weber Rare Books
Share this item