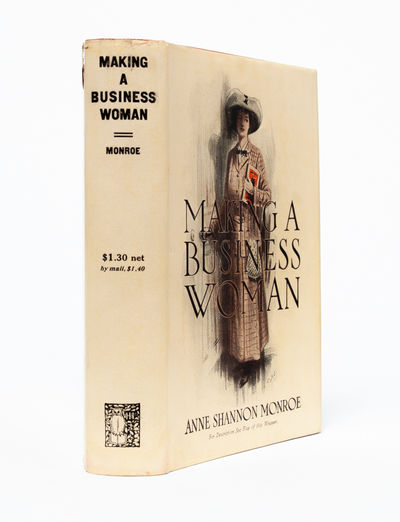 by Monroe, Anne Shannon
New York: Henry Holt and Company, 1912. First edition. Near Fine/Near Fine. Near Fine book in the scarce dust jacket, in like condition. Original red publisher's cloth binding, bright red with bright gilt, and a bit of fading around the foot of spine, which is reflected by the offsetting to the jacket. Jacket with light red staining from book to the rear panel near the foot; small chip to upper rear corner and a small closed tear on the rear panel near the crown. Internally clean and unmarked with the exception of an early ownership signature to front endpaper "Virginia January 27th 1913." Retaining the two page publisher's adverts at rear featuring "New Books Primarily for Women." First appearance in book form, following the four-part serial in The Saturday Evening Post (The Bittner Stories). Scarce on the market, Monroe's semi-autobiographical novel was one of several that gave young women a role model who could inspire their own career ambitions. Monroe enjoyed a successful career in advertising as well as publishing. The author of magazine fiction and non-fiction, she became most popular for writing self-help pieces in Good Housekeeping. The present novel, written in the first-person, draws on Monroe's experiences, and the result is a lively and interesting depiction of an independent-minded young woman's rise through the professional ranks. From the book's opening, there is no mistaking that Miss Gale represents a new and outspoken generation of women. "I was downright tired of being poor. I was equally tired of hearing my past-generation relatives complacently remark: 'No one of our blood was ever in business.'" Casting off old-fashioned notions of class and gender, she decides she will take on office work; under the guidance of Miss Krog and the office owner Mr. Bittner, she overcomes challenges, grows in ambition, moves through the ranks of her Chicago book-publishing company, and ultimately moves toward opening her own advertising firm. Near Fine in Near Fine dust jacket. (Inventory #: 3349)
$1,350.00 add to cart or Buy Direct from
Whitmore Rare Books
Share this item