Notes of What I Saw, and How I Saw it: a Tou Around the World, Including California, Japan, China, Malaacca, Ceylon, India, Arabia, Europe, Cuba and Mexico 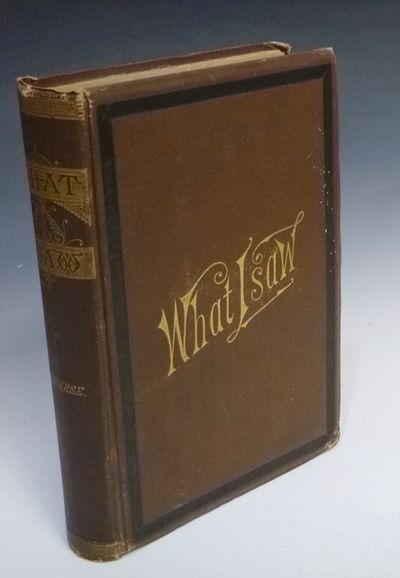 by Converse, Loring
Bucyrus, Ohio: Forum Steam Printing House, 1882. First Edition. Octavo. Signed by the author. From the library of Barry Goldwater with his bookplate. 454 pages, [16]pp. advertising for travelers and illustrated with, 14 plates. . Like Mark Twain and U.S. Grant, Converse and his wife decided to travel around the world in the early 1880's. As he left Ohio, they traveled by train through the Southwest and were warned of Indian raids. they came to Deming, New Mexico Territory a town that was 10 weeks old with a population of 150 and ruled by a desperado (p. 20) He describes Fort Yuma and its desolate condition which he contrasts for the next two chapters on the richness of California, His visits to Japan and China show how a typical Midwesterner viewed the cultures (using the terms 'Jap" and "Chinamen") but describes many customers in the interior while he laments the westernizing of the cities which he realizes takes away from the authenticity of the culture. He claims in his visit to India that Europeans are viewed beneath the lowest caste in India. A fascinating account by an astute observer but one who attempted to understand the culture and not just observe temples and monuments. Bound in brown cloth lettered in gilt, thick rule in black, spine gilt, corners bumped, only light wear to spine ends, front hinge cracked through endpaper. (Howes C720). (Inventory #: 027711)
$135.00 add to cart or Buy Direct from
ALCUIN BOOKS, ABAA
Share this item