Gold Rush Diary, Being the Journal of Elisha Douglass Perkins on the Overland Trail in the Spring and Summer of 1849 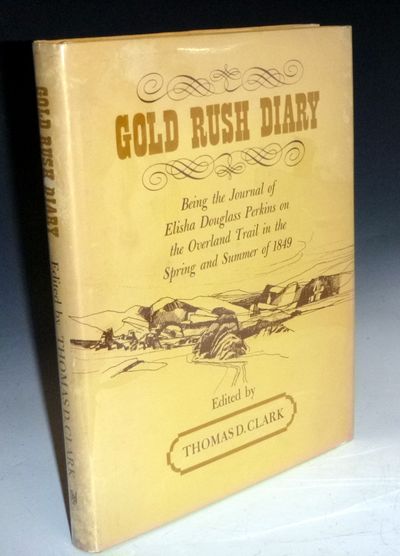 by Perkins, Elisha Douglass and Thomas D. Clark
Lexington: University of Kentucky Press, 1967. First Edition. Quarto. xxv, 206 pages, maps, illustrations, portraits. Bibliographic references, p. 197-201. One of the half dozen best of the travel diaries of the California gold rush, rising above the merely routine and often momentous accounts. Here he was able to capture the anticipation, the drama, and the terror. The work has also the pen sketches of Robert James Foose. A book that can be read by both the general reader as well as the scholar. The maps that often accompany the text helps bring to life the details with specific details often missing from average maps. How this group from Marietta left in search of gold mostly to find frustration and hardship but this account by Elisha Douglass Perkins tells the story with great fascination even for the modern reader. Bound in gold cloth spine lettering dark brown, endpapers are maps, upper corners bumped. A very good copy in an unclipped pictorial dust jacket illustrated by Robert James Foose, chip to foot, lower edge of rear panel and a tiny nick between rush and diary. (Inventory #: 027710)
$50.00 add to cart or Buy Direct from
ALCUIN BOOKS, ABAA
Share this item