the Windmill. Waiting for the Marchioness. 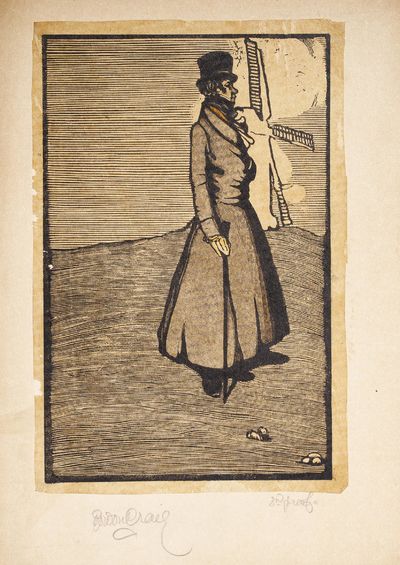 by Craig, Edward Gordon.
Craig, Edward Gordon. The Windmill. Waiting for the Marchioness. (1899). Gordon Craig. Wood engraving (5" x 7 3/4") on thin paper, with a bit of hand-coloring. Mounted on board and signed "Gordon Craig" with a note in his hand "3rd proof". Margins, board mounting somewhat darkened, edges chipped. Print has slight chipping along left margin, otherwise in excellent condition
from The Print-collector's Quarterly, Volume 9 "The now famous woodcut, the large cut of Waiting for the Marchioness, within this first number of 1899, will probably remain one of the most sought-after examples of Gordon Craig's masterpieces on wood. Its superb spacing, its sense of skv and atmosphere, its grip of character, and its satisfying arrangement were a revelation to us all; and when one tries to discover the wizardry of it one is astonished at the restraint and absolute simplicity of the means employed to arouse the impression in our senses. Its indebtedness to James Pryde is obvious; but we have qualities in it that are owed to none and were inspired by none.
Ref: The Print-collector's Quarterly, Fitz Roy Carrington, Campbell Dodgson, Georges Derry, Alfred Fowler, A. H. Stubbs, John H. Bender, William Edwin Rudge Frederick Keppel & Company, 1921 (Inventory #: 983813)
$750.00 add to cart Available from Golden Legend
Share this item
Golden Legend, Inc.
Offered by

New York : Graham's Magazine , 1849
(click for more details about Opera Extravagance Engraved for Grahams Magazine)
View all from this seller>