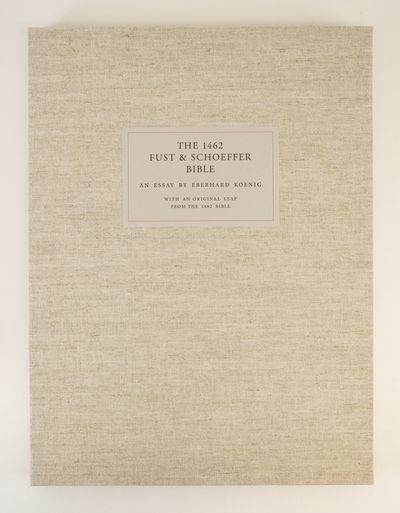 by (LEAF BOOK - INCUNABULA, THE 1462 BIBLE). KOENIG, EBERHARD
Akron and Evanston: Bruce Ferrini / Hamill & Barker, 1993. ONE OF 166 COPIES (of a total of 181). Text: 503 x 375 mm. (19 3/4 x 14 3/4"); Leaf: 405 x 300 mm. (15 7/8 x 11 3/4"); Case: 525 x 395 mm. (20 3/4 x 15 1/2"). 40 pp.With an introduction by Christopher de Hamel. Publisher's gray boards backed with burgundy crushed morocco, paper label on upper cover, black morocco label on flat spine. Housed with the leaf (in a separate linen folder and acid-free chemise) in a linen clamshell box with paper label on upper cover. With black & white photographs of illuminated leaves from copies of this Bible. WITH AN ORIGINAL LEAF FROM THE 1462 BIBLE with headline handwritten in red and blue, chapter numbers in red or blue, and three two-line initials in red or blue, with trailing penwork in a contrasting color; text from 2 Paralipomenon (2 Chronicles), chapters 18-20. In mint condition, with AN EXCEPTIONALLY FINE, BRIGHT LEAF. This is a handsomely designed and impressive leaf book offering a very desirable leaf from the magnificent fourth printed Bible, significant as the first Bible to include the date and names of its printers. Peter Schoeffer (ca. 1425 - ca. 1502) was both Gutenberg's chief assistant and later the son-in-law of Johann Fust (ca. 1400-66), who had lent Gutenberg money and then had taken over his workshop when the debt could not be paid. Fust and Schoeffer went into business together, and, after his partner died, Schoeffer continued to print into the 16th century. The leaf included here is especially desirable: first, for its beautiful condition and attractive penwork initials, and, second, for its rather charming reminder of human fallibility at the dawn of a new age of technology. The person charged with writing the headlines on our leaf originally mistook the text for the book of Jeremiah, when it is in fact from 2 Chronicles (called "Paralipomenon" at the time). On realizing the error, our scribe carefully struck through the "Jere mias" with red paint, and wrote "Parali Pom" (but without noting whether it was the first or second book). Koenig, an authority on 15th century manuscripts and early German printing, puts the leaf and the book it came from into clear perspective by examining the use of the Bible in the late Middle Ages, the history of Fust and Schoeffer, a history of Bible printing, rubrication and illumination of this and other Bibles, the paper used to print this work, localization of the leaves used in this leaf book, and a census of the extant copies of the 1462 Bible. The author comes to the conclusion that the leaves that form the basis of this publication are from the only known copy of the 1462 Bible to have been illuminated in England for the English market. (Inventory #: ST15604)
$5,200.00 add to cart or Buy Direct from
Phillip J. Pirages Fine Books
Share this item