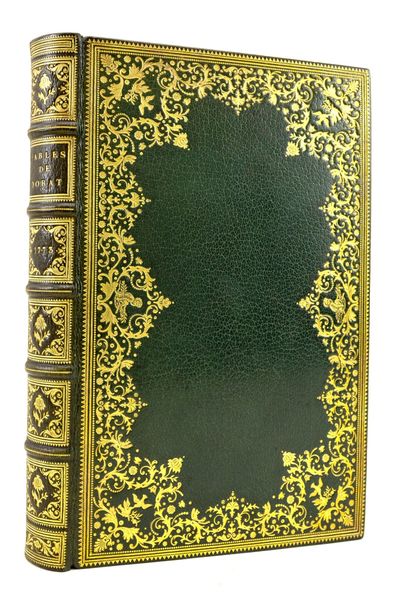 by (BINDINGS - CUZIN). (FRENCH ILLUSTRATED BOOKS). DORAT, CLAUDE-JOSEPH
La Haye [The Hague]: Chez Delalain, 1773. First Edition with these Illustrations. 235 x 147 mm. (9 1/4 x 5 3/4"). xxii, 176, [4], 177-309, [3] pp. Two continuously paginated volumes bound in one. First Edition with these Illustrations. EXTREMELY ELEGANT GREEN CRUSHED MOROCCO, ELABORATELY GILT, BY CUZIN FOR ROBERT HOE (stamp-signed on front and rear doublure, the latter dated "1888"), covers with four plain and decorative gilt rules enclosing an ornate filigree frame of acanthus leaves and many flowers, cornerpieces with delicate lovebird tool and oblique pomegranate sprig, sidepieces featuring an unusual monkey-in-chains tool, raised bands, spine gilt in compartments with pomegranate centerpieces and volute cornerpieces, gilt titling, CRIMSON MOROCCO DOUBLURES with lacy gilt frame, leather hinges, marbled free endpapers and flyleaves, all edges gilt. With allegorical engraved frontispiece and extra engraved title page at the beginning of each volume, vignette portrait of the author on title of first volume, and 198 CHARMING ENGRAVED VIGNETTE HEAD- AND TAILPIECES AFTER MARILLIER. Front free endleaf with morocco bookplates of Robert Hoe and Cortlandt Bishop, and engraved bookplate of Mary S. Collins. A Large Paper Copy. Ray 43; Cohen-de Ricci 313; Fürstenberg Catalogue 77. Spine just slightly and evenly sunned (as very frequently with green morocco), a breath of wear to joints and extremities, occasional faint marginal foxing, other trivial internal imperfections, but QUITE A FINE COPY OF A VERY LOVELY BOOK, clean and fresh inside with ample margins and rich impressions of the engravings, and the binding lustrous and glistening with gold. Handsomely bound to the specifications of one of America's greatest bibliophiles, this exquisitely illustrated collection of lighthearted fables is, in Ray's words, a "masterpiece of miniature illustration." The work here is done by Pierre-Clément Marillier (1749-1808), described by Portalis as "the artist of the infinitely small." Cohen-de Ricci calls this Marillier's masterpiece, praising "the fineness of execution and of the spirit that reigns in all the pretty subjects that adorn it." The delightful vignettes illustrating each fable are remarkably rich in detail; Ray notes that it almost seems that Dorat made extensive "play . . . with snails, grasshoppers, flies, bees, oysters and even a glow-worm" in his tales with the deliberate intention to exploit this talent. A former musketeer, the Chevalier Claude-Joseph Dorat (1734-80) was a prolific producer of plays and airy verse, but was justifiably insecure about his modest literary success. To increase sales and attract favorable notice from critics, Dorat spent lavish sums to produce handsome and expensive editions of his works, which, as in the present case, are adorned with fine illustrations by the best artists of the day. The present Large Paper Copy has pages more than 8-3/8" tall and "with brilliant impressions of the vignettes" that Ray proclaims to be "much more desirable" than the slightly smaller version. This item is also distinguished as a volume bound for bibliophile extraordinaire Robert Hoe by the great French binder Francisque Cuzin (1836-90). Born in the provinces and apprenticed at the age of 13 to the Bourg binder Tiersot, Cuzin found a place in Paris with trade binders, then worked his way up to the lofty premises of Trautz-Bauzonnet before setting up shop on his own at 25. Beraldi says that he quickly made a name for himself by binding earlier books with fine engravings in elegant period-style bindings--a specialty shown off to good effect here. Bibliophiles began to support his work financially, and he became one of the eminent Parisian binders of the day. Beverly Chew said that Hoe (1839-1911), founding member and first president of the Grolier Club, had a collection that was "the finest [America] has ever contained." He acquired illuminated manuscripts, early printing, French and English literature, and extremely fine bindings; when his library was sold in 1911-12, it fetched nearly $2 million, a record that held until the Streeter sale more than 50 years later. Our volume then passed into the collection of Cortlandt F. Bishop (1870-1935), an American aviation pioneer, automobile enthusiast, art collector, and bibliophile whose books reflected outstanding taste and discrimination. His library contained treasures in a range of areas but was especially rich in elegant bindings. The present copy was later owned by Mary Schell Collins (1864-1948), who shared the bibliophilic interests of her husband, collector and publisher Philip Collins. (Inventory #: ST15949)
$5,720.00 add to cart or Buy Direct from
Phillip J. Pirages Fine Books
Share this item

TEXT FOR THE MONTH OF JANUARY

by AN ILLUMINATED VELLUM MANUSCRIPT LEAF, FROM AN ENGAGING LITTLE BOOK OF HOURS IN LATIN

TEXT FOR THE MONTH OF FEBRUARY

by ILLUMINATED VELLUM MANUSCRIPT CALENDAR LEAF, FROM AN ENGAGING LITTLE BOOK OF HOURS IN LATIN

Northern France [probably Paris] ca. 1460s
(click for more details about TEXT FOR THE MONTH OF FEBRUARY)
View all from this seller>