[BRITISH EMPIRE] [INDIA] Culinary Jottings - A Treatise in Thirty Chapters on Reformed Cookery for Anglo-Indian based upon Modern English, and Continental Principles, with Thirty Menus for Little Dinners worked out in Detail, and An Essay on our Kitchens in India 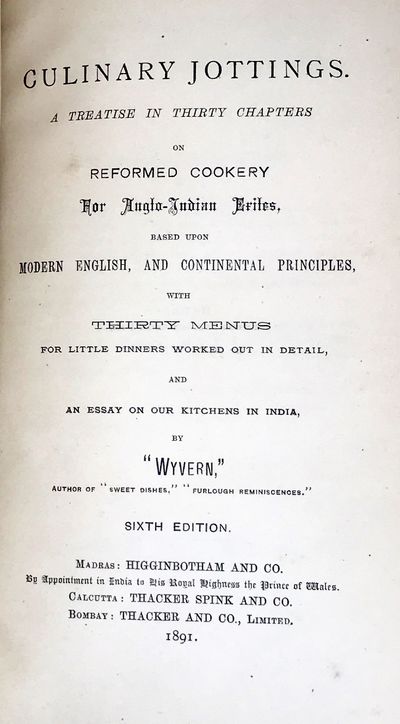 by "Wyvern" (Colonel A.R. Kenney-Herbert)
Madras: Higginbotham and Co., 1891. Sixth Edition. Hardcover. Plain cream boards, gray linen spine. Good. 608 pages. 20 x 13 cm. 'Wyvern' wrote about gastronomy for for the Madras Athenaeum and Daily News during his time in Madras as a Colonel in the India Army. With social changes stirring in India, the Colonel's directives furnished to local staff to create the Victorian haute cuisine desired by the Anglo-Indian elite illustrate the transformations occurring throughout the British empire. Chapters cover every aspect of the kitchen, the storeroom, model menus, and of course curries. This edition, the sixth, contains all preceding prefaces illustrating the changes in taste and style during the mid to later 1800's in Anglo-Indian culture. Hinges cracked but holding. Covers rubbed, closed tears to cloth spine. Interior clean. (Inventory #: 2165)
$75.00 add to cart Available from
lizzyoung bookseller
Share this item