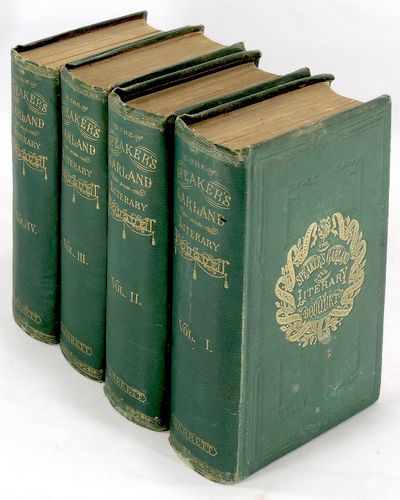 by Various (Longfellow, Byron, Hood, Shakespeare, Bryant, Browning, Tennyson, Dickens, et. al.)
Philadelphia: P. Garrett and Co, 1881. Hardcover. Very Good. Hardcover. A collection of: "Rare poetical gems, fine specimens of oratory, popular patriotic effusions, thrilling sentiment, impassioned eloquence, tender pathos, and sparkling humor. For the use of Lyceums, Temperance Societies, Anniversaries, Exhibition-Rooms, Church Sociables, and the Home Circle; also a Class-Book in Schools and Academies." Four volumes - each containing four parts - bound in green cloth with gilt titles to spines and front covers. Minor wear to edges of boards, hinges, and corners. Minor soiling to boards of some volumes. Previous owner has pasted in additional poems to the endpapers of some volumes and has also hand written notes and poems on some endpapers in pen. Occasional pen and pencil markings to margins and turned corners. Occasional tears to margins. Some volumes lack endpapers. Volume II lacks the front free endpaper, rear free endpaper, and title page. The textblock in this volume is detached, but in one piece. Occasional splits to interiors of bindings. Each of the four parts in each volume is paginated seperately. This was clearly a much loved collection of poetry. An attractive, readable set despite noted condition issues and fragility of volume II. Each volume is about 600 - 700 pages. POE/051320. (Inventory #: 34021)
$45.00 add to cart or Buy Direct from
Kelmscott Bookshop
Share this item

Christ: The Living Water. The Catholic Church in Mississippi

Jackson : Catholic Diocese of Jackson, Mississippi (and Mississippi Today) , 1989
(click for more details about Christ: The Living Water. The Catholic Church in Mississippi)
View all from this seller>