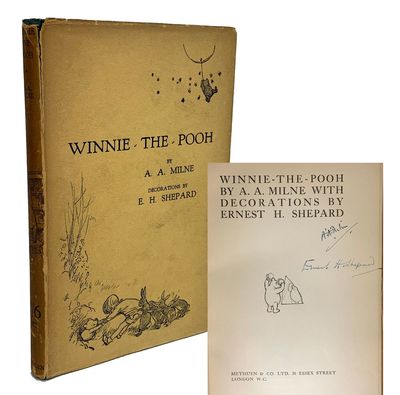 by Milne, A. A.
London: Methuen and Co., 1926 Illustrated by Ernest H. Shepard. First edition, first printing, first state dust jacket with "117th Thousand" to rear flap. Signed by Milne and Shepard to the title page. Publisher's dark green cloth, decorated in gilt to front board with an illustration of Christopher Robin and Pooh, lettered in gilt to spine, top edge gilt, illustrated map endpapers; in the original tan pictorial dust jacket printed with Shepard's illustrations in black. An excellent copy with only some very minor rubbing to the spine ends and slight offsetting to the endpaper; in the jacket with some toning to the spine and some chipping with minor loss to the spine ends, else very good. Overall, a very attractive copy, exceptionally scarce signed by both author and illustrator. Housed in a custom folding box with leather spine label, lettered in gilt. Winnie-the-Pooh is the second in Milne's series of children's books featuring the adventures of the teddy bear character Winnie the Pooh and his friends. Each telling an individual and complete story, the chapters of Winnie-the-Pooh can be read independently of one another. Milne created the story of Winnie the Pooh for his son Christopher Robin, who had a teddy bear named Edward Bear. In his introduction, Milne explains how Edward Bear became Winnie the Pooh, although he notes that "we can't remember whether Winnie is called after Pooh, or Pooh after Winnie." The name "Winnie" comes from a bear that the Milnes saw at the London Zoo, while the name "Pooh" is from a swan whom the fictional Christopher Robin encountered in When We Were Very Young (1924).. Signed by Author and Illustrator. First Edition.. Hard Cover. Near Fine/Dust Jacket Included. (Inventory #: AAM067)
$19,000.00 add to cart or Buy Direct from
B & B Rare Books
Share this item

The Hound of Death and Other Stories

London: Odhams Press Limited , 1933
(click for more details about The Hound of Death and Other Stories)

One Hundred Years of Solitude

New York: Harper & Row , 1970
(click for more details about One Hundred Years of Solitude)
View all from this seller>