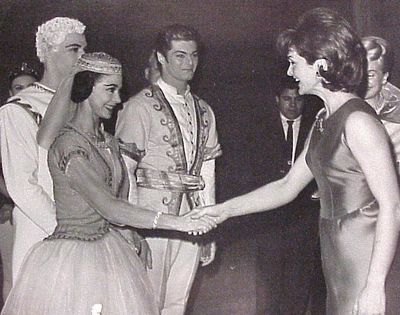 by Kennedy, Jackie & Margot Fonteyn
Jackie Kennedy's Letters to Dame Margot Fonteyn
A COLLECTION OF 14 ITEMS INCLUDING PHOTOGRAPHS, AUTOGRAPH LETTERS ANDCARDS FROM JACQUELfNE KENNEDY TO MARGOT FONTEYN. The correspondence reflects Kennedy's deep admiration of both ballet and of Fonteyn. It also provides valuable insight into Kennedy's attempts while First Lady to bring ballet to the American people. The long friendship between Kennedy and Fonteyn which began in 1962 and extended until, at least, the marriage of Caroline Kennedy in 1986, is also documented in these letters and photographs.I - Ballet Related Material

(1).Four page autograph letter, signed, "Jacqueline Kennedy." June 5, 1963. Written on White House stationery, with hand addressed envelope. To "My dear Dame Margot."Inviting Margot Fonteyn to dance at the White House. Excerpts:I am so very glad that you did not dance here June 3 -as that way it would have been all behind us now-and I would have only my civic duties to the local opera to beckon me into next winter.Please do not feel pressed about giving us dates - just let us know whenever you can ... there is also much leeway-and if you can just tell me - as your plans for the winter evolve-And if you like surprises -you may have one -for I cannot tell you yet if you will be dancing for the Vice President or for Hai lie Selassie -but it will really be for us -which is most selfish to say - but forgivable -as there are no two people in the world you could find who would appreciate it more...


(3). Three page, autograph letter, signed, "Much much love dear Margot, Jackie." Written on blue l 040Fifth Avenue Stationary. To "Dear Margot." With matching envelope hand addressed by Jackie Kennedy to "Dame Margot Fonteyn de Arias."
(4). On attending a performance and then going out to dinner with Fonteyn and her husband. Excerpts:... Last night was so beautiful that I shall be forever moved by it - Tears would sting my eyes when remembered it - as they did last night watching you .. .I thought today - all the definitions of Beauty, of Art, too complicated exercises of words ... The test is - if you are changed forever by seeing it - and that is what happened last night.

Please tell Tito how perfect he made the evening- sitting in his marvelous box - with everyone there so nice - and then our supper afterwards in that marvelous Voisin with its boiseries, all to ourselves - I felt like Marie Antoinette at a Fete galante.

(5). On attending a performance of Swan Lake. Excerpts:I know you never read reviews - but I hope just once someone forced you to .. .l read the New York Times about you last night at Swan Lake in New York - It must have been something absolutely supernatural - that will tum up as legend, as everyone who was there tells their children who will tell theirs - and something that will never, never happen again in the history of the world ...

On dancing with Rudolph Nureyev after a dinner party. Excerpts:You could not possibly have had as wonderful a time as we did - I only hope it won't mean that you both [Fonteyn and Nureyev] won't come tottering on stage tonight and we will have Sol[Hurok,

.with Three autograph thank you notes from the three children to Margot Fonteyn's husband. Including:
From Caroline Kennedy. "Dear Ambassador Arias,/ ... The ballet was so beautiful and everyone was so
nice to us. Going backstage was so much fun and Dame Margot looked so wonderful."
From John Kennedy Jr. "Dear Ambassador Arias,/ Thank you so much for taking me to Giselle (sic) I really loved it.... Thanking you again for the ice cream .... Love, John Kennedy.