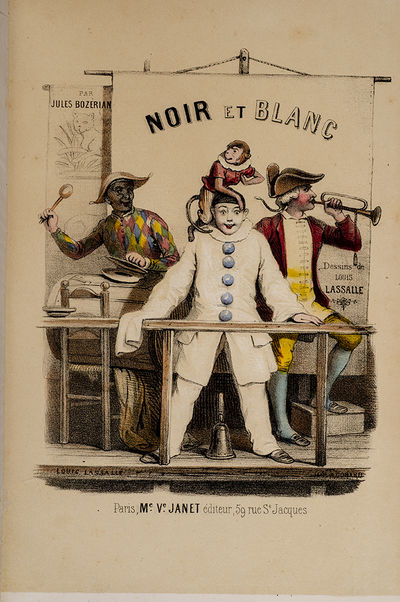 first edition
by BOZÉRIAN, Jules; LASSALLE, Louis Simon Cabaillot, illus
Paris: Mme. Ve Louis Janet, 1849. The Adventures of Pierrot and Harlequin With Sixteen Hand-Colored Lithograph Plates by Louis Lassalle LASSALLE, Louis Simon Cabaillot, illustrator. BOZÉRIAN, Jules. Noir et Blanc: Vie et Aventures de Pierrot et de Son Ami Arlequin. Enriche de 16 vignettes par Louis Lassalle rehaussées en couleur. Paris: Mme. Ve Louis Janet, [1849]. Octavo (9 1/8 x 5 7/8 inches; 232 x 149 mm.). [viii], 232 pp. Hand colored frontispiece and pictorial title, and fourteen hand colored lithograph plates with original tissue guards. Neat early ink signature on half-title. Some scattered light foxing to text. Publisher's quarter red morocco over red cloth boards decoratively stamped in blind. Spine with four raised bands decoratively tooled and lettered in gilt,faux moiré silk endleaves, all edges gilt. Slight (1 1/2 inch) split to upper joints, but still sound. Pierrot is a stock character of pantomime and commedia dell'arte whose origins are in the late seventeenth-century Italian troupe of players performing in Paris and known as the Comédie-Italienne; the name is a diminutive of Pierre (Peter). His character in contemporary popular culture-in poetry, fiction, and the visual arts, as well as works for the stage, screen, and concert hall-is that of the sad clown, pining for love of Columbine, who usually breaks his heart and leaves him for Harlequin. Performing unmasked, with a whitened face, he wears a loose white blouse with large buttons and wide white pantaloons. Sometimes he appears with a frilled collaret and a hat, usually with a close-fitting crown and wide round brim, more rarely with a conical shape like a dunce's cap. But most frequently, since his reincarnation under Jean-Gaspard Deburau, he wears neither collar nor hat, only a black skullcap. The defining characteristic of Pierrot is his naïveté: he is seen as a fool, often the butt of pranks, yet nonetheless trusting. Louis Simon Cabaillot Lassalle (1808-1885). Known under his artist name Louis Lassalle, he was student of Pierrre Paris and Louis Charles Müller (1815-1892). He began his working life as a draftsman and a lithographer. Lassalle lived in Paris and from 1828 to 1854 produced several hundred lithographs and many paintings. His first exhibition took place at the 1850 Salon de Paris where he showed three of his paintings which were very well received by the artistic community. Lassalle was honored by Queen Victoria when she purchased a decorative fan which had belonged to Jean-Pierre Duvelleroy (1802-1889) and which had been hand-painted by Lassalle. Influenced by Pierre Edouard Frere, he moved toward genre painting and showed a remarkable talent for depicting young children playing in the snow. One of his paintings "Une Partie de Traineau" (A Sledge Party) is on display in the Ecouen meeting room. (Inventory #: 04840)
$850.00 add to cart or Buy Direct from
David Brass Rare Books
Share this item

London: Matthew Iley, 1821
(click for more details about Tour of Doctor Prosody, The... in Search of the Antique and Picturesque, through Scotland, the Hebrides, the Orkney and Shetland Isles;)