Medicine and Mankind; Lectures to the Laity Delivered at the New York Academy of Medicine. 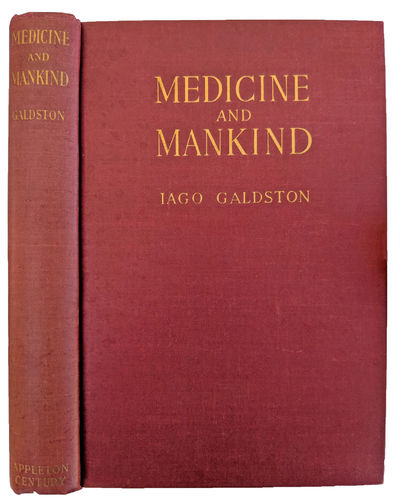 by GALDSTON, Iago (1895-1989) (editor).
New York:: D. Appleton-Century, 1936., 1936. 8vo. vi, [2], 217 pp. Red gilt-stamped cloth. Bookplate of J.C. Kennedy; rubber-stamp of Columbia Clinic, Portland, OR. Very good. The book is composed of an Introduction by Eugene H. Pool, M.D., President of the New York Academy of Medicine, and seven lectures by outstanding physicians, as follows: CONTENTS: How we learned about the human body, by Benjamin P. Watson – Medicine in the days of the grand monarch, by Howard W. Haggard – The contributions of the primitive American to medicine, by Harlow Brooks -- The Common Denominator of Disease, by George Draper, M.D. -- The Organic Background of Disease, by Foster Kennedy, M.D. -- The Story of the Vitamins, by Elmer V. McCollum, Ph.D. -- The Mystery of Death, by Alexis Carrel, M.D. (Inventory #: EEG1058)
$18.00 add to cart Available from
Jeff Weber Rare Books
Share this item