Bibliotheca Chemica; A Bibliography of Books on Alchemy, Chemistry and Pharmaceutics. [Two volumes]. 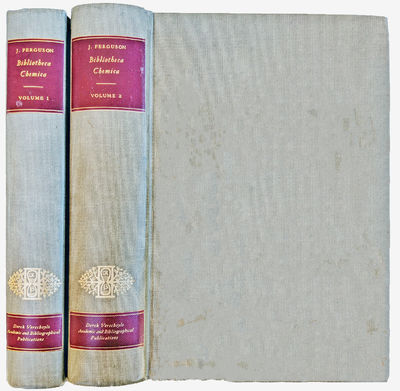 by FERGUSON, John (1837-1916).
London:: Derek Verschoyle, 1954., 1954. Reprint. Two volumes. 8vo. [3], xxi, [1], 487, [1]; [6], 598, [2] pp. Khaki gilt-stamped cloth; some freckling. Good. John Ferguson FRSE LL.D. was a Scottish chemist and bibliographer. He is noted for the early alchemy and chemistry bibliography Bibliotheca chemica. A collection of 7,500 books and manuscripts, held by Glasgow University originally from his library, are known as the Ferguson Collection. Ferguson had an extensive library of books pertaining to alchemy, early chemistry, metallurgy, mineralogy, Paracelsus, the Romani language, the Rosicrucians, and witchcraft. In 1921 the University of Glasgow purchased about 11,000 of the books for the sum of £7000. [Wikip.]. EXTRA POSTAGE WILL APPLY. (Inventory #: EEG1051)
$55.00 add to cart Available from
Jeff Weber Rare Books
Share this item