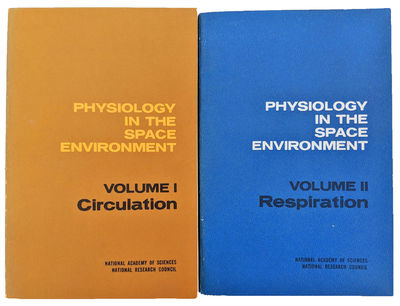 by National Academy of Sciences, National Research Council.
Washington D.C.:: National Academy of Sciences, 1967-8. Series: NAS/NRC publication No. 1485 A+B., 1967. 2 volumes. 8vo. [8], 150; [9], 187 pp. Printed wrappers. Book-label of professor Ralph H. Kellogg Very good. These two volumes cover research requested by NASA's Office of Advanced Research & Technology and the Space Science Board, which in 1966 initiated studies of the physiological problems of manned space flight. The two-part study on respiratory physiology and circulatory physiology, were done by a team of experts who wrote the report published here. Due to the complexity of problems relating to the unknown possible effects of prolonged space flight on the circulatory system, these studies were vital to the success of NASA programs. / PROVENANCE: Ralph H. Kellogg (1920-2009), matriculated to the medical school at the University of Rochester, then after WWII he taught at the Dept. of Physiology at Harvard Medical School, taking his Ph.D. in 1953, then he joined UC Berkeley and then UCSF as Professor of Physiology, where he worked for more than 50 years, specializing in renal and respiratory physiology, with particular attention to physiology of high altitude. "Facilities were primitive, and they were subjects for their own experiments. Their measurements yielded additional information about the control of breathing that helps people adjust to the lack of oxygen pressure in the air. Very few physiologists in the world had laboratory facilities to work at such high altitude, and Ralph came to know most of them." He also collected rare books on mountaineering, clearly relating this interest to the study of high altitude conditions and the human experience. (Inventory #: EEG1119)
$30.00 add to cart Available from
Jeff Weber Rare Books
Share this item