THE GREEN PASTURES: A FABLE [INSCRIBED BY CONNELLY TO FRANCES MARION] [PRESENTATION COPY] 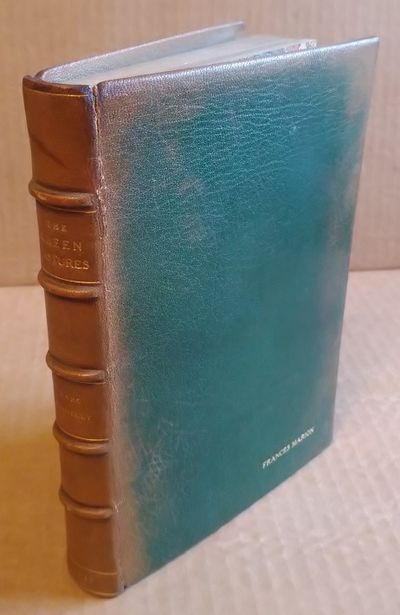 by Connelly, Marc
New York: Farrar & Rinehart, Incorporated, 1929. First Edition. 8vo., 217pp.; VG; spine brown leather with 5 raised bands, gilt lettering; rebound in full green leather, spine and board edges faded to brown, floral patterned endpapers; top edge of text block gilt; Frances Marion's name embossed in gilt on lower fore corner of front board; mild shelfwear; INSCRIBED and presented by author Marc Connelly to Francis Marion on the second front endpaper, dated 1935; LSM consignment; See all five photos for details The most renowned female screenwriter of the 20th century, and one of the most respected scriptwriters of any gender, Frances Marion was the first writer to win two Academy Awards, for her writing on The Big House (1930) and The Champ (1931), and the first woman to win an Academy Award for Best Original Screenplay. She served in Europe as a combat correspondent during World War I, after which she moved to Los Angeles and was employed by director Lois Weber as an assistant, in which position she received a thorough apprenticeship in the film industry. She began writing scripts and attracted the attention of Mary Pickford. The pair began a long relationship as both friends and artists, with Marion serving as Pickford's official screenwriter. She wrote many of Pickford's most famous and memorable silent films as well as many other of the great successful pictures of the 1920s and 1930s, and has been credited with writing 300 scripts and over 130 produced films. Her influence resurrected the career of Marie Dressler and resulted in her greatest glory, and her scripts for Marion Davies are among the most memorable of that actress' oeuvre. She died in 1973, one of the most respected names in Hollywood history. Shelved in AS office. Rockville Non-Retail Listings. (Inventory #: 13-114-1275098)
$150.00 add to cart or Buy Direct from
Second Story Books
Share this item

The Romance of the Milky Way & Other Studies & Stories

Boston & New York : Houghton Mifflin and Company , 1905
(click for more details about The Romance of the Milky Way & Other Studies & Stories)
View all from this seller>