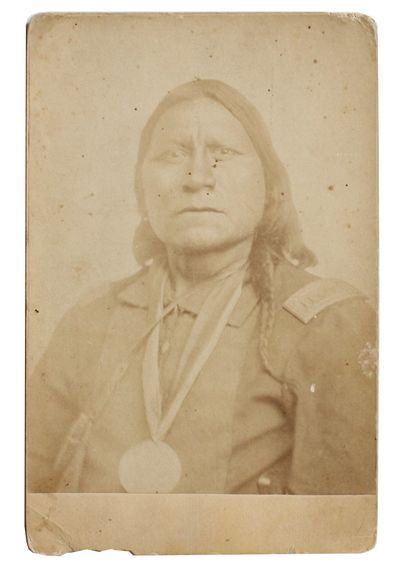 Fort Sill, I.T.: W.S. Soule, [circa 1868]. Albumen photograph measuring 5¾" x 4¼" on larger card mount, printed photographer imprint on verso. Very good minus: card with heavy edgewear and a small strip of loss at bottom, photo a bit faded and lightly foxed; early penciled notes regarding Satanta on verso. Satanta was a Kiowa war chief born around 1820 to Chief Red Tipi and a Spanish captive. He was one of best known leaders of his tribe in the 1860s and 1870s, well known for both his battle and oratorical skills. He was one of the Chiefs who negotiated several treaties with the American government during the 1860s, including the Little Arkansas Treaty (1865) and the Medicine Lodge Treaty (1867). In the Medicine Lodge Treaty, Satanta agreed that the Kiowas would live on a reservation. When the tribe failed to move onto it, he was seized by Custer and held as a hostage until the forced removal and migration took place. This item is offered by Langdon Manor Books, LLC, antiquarian booksellers. Please do not hesitate to contact us for additional information and/or photos and we will respond promptly. We package our items carefully, ship daily, and have a no hassle returns policy--your satisfaction is guaranteed. We are members of the Antiquarian Booksellers' Association of America (ABAA), the International League of Antiquarian Booksllers (ILAB) and the Independent Online Booksellers Association (IOBA) and adhere to their rules of ethics. (Inventory #: 3779)
$450.00 add to cart or Buy Direct from
Langdon Manor Books
Share this item
Langdon Manor Books, LLC
Offered by