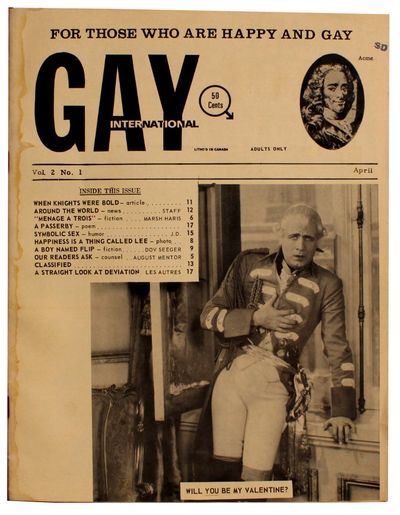 by Maynard, Robert [editor]
Toronto, Canada: Gay Publishing Co. Ltd, 1965. Very good. 10¾" x 8½". Stapled self wrappers. pp. 20. Very good minus: thin line of dampstaining at spine on both wrappers which also have a two inch split at the top. Gay International was a Canadian publication that was one of the earliest (some say the first) LGBTQ periodicals to use the word "gay" in its title. It was also one of the first gay periodicals published in Toronto, Canada and was created at a time when gay liberation had not quite yet coalesced into a movement in that region. This issue contains a brief history of the magazine's tumultuous first year as well as an editorial expounding on the use of the word "gay" as opposed to "homosexual." It also has a complete short story by Marsh Haris, a prolific gay pulp writer who eventually married Tony Segura, one of the founders of the Mattachine Society. Readers wrote in asking difficult questions regarding the loneliness of being gay and what places of worship might accept them. A few pages were devoted to international news affecting the gay community and the back cover listed over 20 LGBTQ activist groups in Canada, the United States and several other countries. Although the goal was national success, the paper ceased publication about two years after it was born. A daring title from a Canadian publisher who braved the associated stigma of homosexuality with one word. OCLC locates 11 institutional holdings, with only one listing this specific issue. This item is offered by Langdon Manor Books, LLC, antiquarian booksellers. Please do not hesitate to contact us for additional information and/or photos and we will respond promptly. We package our items carefully, ship daily, and have a no hassle returns policy--your satisfaction is guaranteed. We are members of the Antiquarian Booksellers' Association of America (ABAA), the International League of Antiquarian Booksllers (ILAB) and the Independent Online Booksellers Association (IOBA) and adhere to their rules of ethics. (Inventory #: 3168)
$400.00 add to cart or Buy Direct from
Langdon Manor Books
Share this item

New York : American Committee on Africa , 1966
(click for more details about South Africa Bulletin. No. 7. [November, 1966])
View all from this seller>