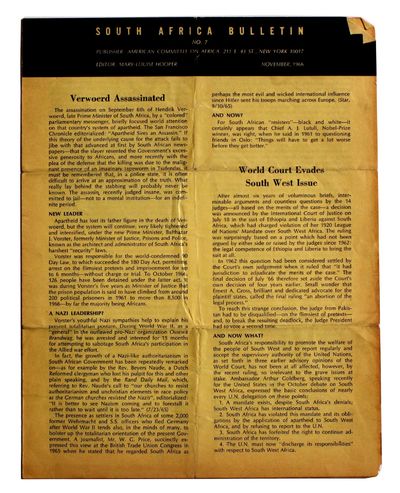 by Hooper, Mary-Louise, editor
New York: American Committee on Africa, 1966. 11" x 8 1/2". Bifolium. pp. [4]. Good: toned at extremities, dog-eared, old folds. The editor of this publication, Mary-Louise Hooper, was a wealthy American activist whose unflagging desire to help others was influenced by her mother's work as a missionary. This influence moved her to devote her time to improving inter-racial relations both domestically and abroad. Between 1955-1957, Mary-Louise moved to South Africa, campaigning to abolish apartheid and working as the first white member of the African National Congress. After being imprisoned in 1957, she was deported for her support of blacks in South Africa. A June 1959 article in the San Francisco Examiner dubbed her a civil rights leader who became interested in the anti-apartheid movement during a study tour in Africa because, "I happen to believe that human freedom is the most important thing I know, and there is no freedom for the non-white population of South Africa." When she returned to the United States, she continued to actively oppose apartheid, and in 1964 moved to New York from California, becoming a volunteer Program Director for the American Committee on Africa, and editor of the South Africa Bulletin from 1964 to 1968. Included in this issue are articles on the problems facing South West Africa, as well as a call to citizens to support their crusade against apartheid by withdrawing their money from the First National City Bank and the Chase Manhattan Bank because of their continued investment in South Africa. The final page has a mailer that can be used to pledge support to the Committee of Conscience Against Apartheid. OCLC locates three libraries that hold this series, but we have been unable to verify if this issue is part of their holdings. None in the trade. This item is offered by Langdon Manor Books, LLC, antiquarian booksellers. Please do not hesitate to contact us for additional information and/or photos and we will respond promptly. We package our items carefully, ship daily, and have a no hassle returns policy--your satisfaction is guaranteed. We are members of the Antiquarian Booksellers' Association of America (ABAA), the International League of Antiquarian Booksllers (ILAB) and the Independent Online Booksellers Association (IOBA) and adhere to their rules of ethics. (Inventory #: 1909)
$100.00 add to cart or Buy Direct from
Langdon Manor Books
Share this item

Hunt's Point, Bronx, New York 1927
(click for more details about Photo Album Documenting the Construction of a Gas Plant in the Bronx)
View all from this seller>