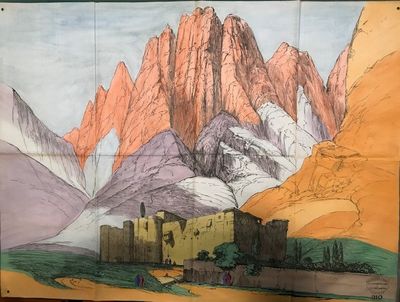 A unique assemblage of these educational aids. There is a distinct circular stamp in the corner of each hanging. One is: Published by the Working Men's Educational Union / 43 Skinner St. Snow Hill London, or, 25 King William St. Trafalgar Square London. The WMEU was founded in 1852 as a philanthropic society to educate the working classes. A different stamp: Religious Tract Society 56 Paternoster Row & 65 St. Paul's Churchyard, London. The RTS was an evangelical interdenominational Protestant organization founded in London in 1799. The original aim was to produce and distribute religious tracts to convert the working classes of the UK to evangelical Christianity. By 1850 it was operating across the globe with an enormous program of publications. The hangings were printed on cotton allowing them to be folded, stored, and unfolded to be repeatedly exhibited. On January 5, 1853 the Manchester Guardian carried the following advertisement: "A lecture, the first of a course, publicly advertised, in connection with the Working Men's Educational Union, was delivered on Monday evening by Benjamin Scott ... on the subject of ancient Egypt. The lecturer having briefly glanced ... at the geography, geology, and climate, of the country whose wonders he was about to illustrate, explained its archaeological remains, including temples, palaces, monuments, colossal statues, tombs, and pyramids ... which was greatly enhanced and simplified by reference to scientific diagrams, beautifully designed and coloured .... We see that an exhibition (with free admission) of the pictures and diagrams of the London Working Men's Educational Union, is to take place at the lecture room of the Young Men's Christian Association ...." The Victoria and Albert Museum exhibited a group of these hangings in 1952 in an exhibition entitled, Victorian Wall Sheets (alas, no catalog was produced). There is a book of photographs of sheets published by the WMEU at the Bodleian. (Inventory #: 20055)
$28,000.00 add to cart Available from
Palinurus Antiquarian Books
Share this item