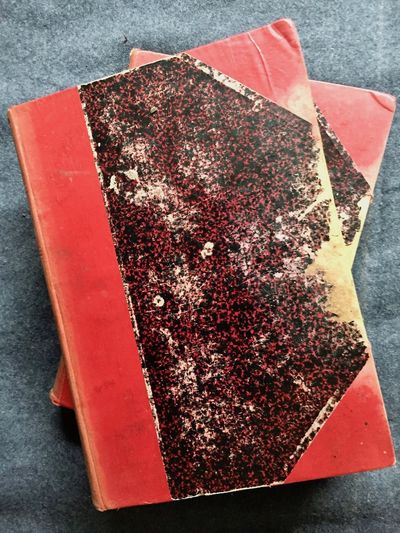 by Rivera Cambas, Manuel
Mexico City: Imprenta de la Reforma, 1880 . First edition. Mexico City: Imprenta de la Reforma, 1880 / 82. First edition. Two volumes (of three), large quartos, pp xxxv, 515, 18, and with 61 (of 67) plates; frontis., vi, 534, 7, and 61 (of 70) plates. Total number of plates is 122, all full-page, not included in pagination. (The plate count is given in the back of each volume; it should be noted that plate counts in volumes such as this are often misnumbered, and the present set shows no sign that plates were excised.) The first two volumes deal with Mexico City and its environs; vol. 3, not present, dealt with the rest of the country. The lithograph plates in these volumes are of very high quality, on especially thin paper used to enhance the imprint, showing everything of interest in the city at the time, along with valuable descriptive and historical text by the author. The plates as well as the text are of great value in documenting the architectural scene in Mexico, esp. the capitol. (Even included are views of the new streetcar system that had been recently installed.) The lithographs were done by L. Garces and executed by the firm of Murguia, noted for the superb quality of their work. Cambas, 1840 - 1917, was an important historian of his day, with other important works to his name. Mathes in his book on Mexican lithography, Mexico on Stone, pp. 41-44, calls the set: "The most important album of Mexican views of the century". Reprinted several times in the 1970 - 80, the original set is extremely scarce on the market -- no complete sets have apparently ever come up at auction; OCLC notes only 6 library holdings, but with no indication of the completeness of the volumes. (Palau 270223/4) Volumes are bound in red cloth over marbled boards, which show some scuffing. Paper is somewhat toned but not at all brittle, frontispiece of vol. 2 is present but detached, binding is sound, and the plates are all in excellent shape. (Inventory #: 7521)
$1500.00 add to cart Available from Plaza Books
Share this item