Rebels at the Gate: Lee and McClellan on the Front Line of a Nation Divided 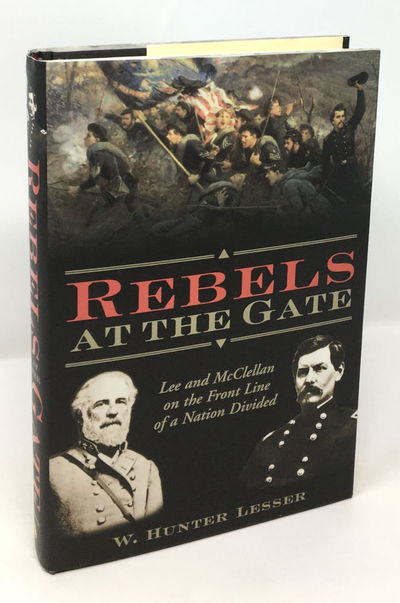 by Lesser, W. Hunter
Hardcover with dust jacket, black paper over boards with red spine titles, 15.5 by 23.5 cm, [v] 375 pp., illus. Near fine, unread copy with only faint signs of shelf wear. The jacket is very good with light edge wear. From the publisher: "Rebels at the Gate is the dramatic story of the first Union victories of the Civil War and the events that caused Virginians to divide their state. In a defiant act to sustain President Lincoln's war effort, Virginia Unionists created their own state government in 1861-destined to become the new state of West Virginia. Their actions blocked what should have been Confederate control of the territory and closed one of their key gateways to the Union states. Against this backdrop, Union and Confederate troops fought the war's first campaign. Amid Virginia's rugged mountains, a Union army led by George B. McClellan grappled with Confederates directed by Robert E. Lee. Each general with his first command fought a great battle, which Lee lost, almost wrecking his career at the very start of the war. A microcosm of the great issues that divided a nation, this first campaign secured 'Western' Virginia for the Union, dictated future battlegrounds, chiseled raw recruits into hardy veterans and forged leaders who shaped the course of America's Civil War." (Inventory #: 3606)
$16.00 add to cart Available from Bay Leaf Books
Share this item