Perryville: This Grand Havoc of Battle 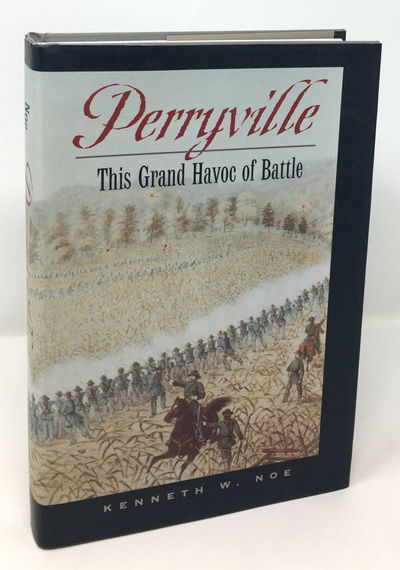 by Noe, Kenneth W.
Hardcover with dust jacket, grey cloth with red spine titles, 16 by 24 cm, xxiv 494., illus. Near fine, unread copy with only faint signs of shelf wear. From the publisher: "On October 8, 1862, Union and Confederate forces clashed near Perryville, Kentucky, in what would be the largest battle ever fought on Kentucky soil. The climax of a campaign that began two months before in northern Mississippi, Perryville came to be recognized as the high water mark of the western Confederacy. Some said the hard-fought battle, forever remembered by participants for its sheer savagery and for their commanders' confusion, was the worst battle of the war, losing the last chance to bring the Commonwealth into the Confederacy and leaving Kentucky firmly under Federal control. Although Gen. Braxton Bragg's Confederates won the day, Bragg soon retreated in the face of Gen. Don Carlos Buell's overwhelming numbers. Perryville: This Grand Havoc of Battle is the definitive account of this important conflict. While providing all the parry and thrust one might expect from an excellent battle narrative, the book also reflects the new trends in Civil War history in its concern for ordinary soldiers and civilians caught in the slaughterhouse. The last chapter, unique among Civil War battle narratives, even discusses the battle's veterans, their families, efforts to preserve the battlefield, and the many ways Americans have remembered and commemorated Perryville." (Inventory #: 3607)
$20.00 add to cart Available from Bay Leaf Books
Share this item