The Boy General: The Life and Careers of Francis Channing Barlow 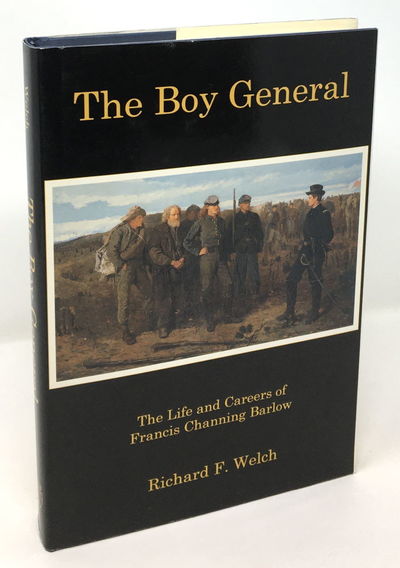 by Welch, Richard F.
Hardcover with dust jacket, blue cloth with gilt spine titles, 16 by 24 cm, 301 pp. Near fine, unread copy with only faint signs of shelf wear. The jacket is very good with light edge wear, a small tear at the bottom of the front flap crease, and minor yellowing around the edges. From the publisher: "Drawing heavily on primary-source material, The Boy General is the first full-length account of Francis Channing Barlow, one of the most successful combat officers in the Army of the Potomac during the Civil War. Although his clean-shaven, youthful appearance earned him the nickname 'the Boy General,' his fighting capabilities resulted in frequent promotions and great responsibilities. Born in October 1834 in Brooklyn, New York, Barlow's professional, military, and political careers were all in the service of his native state. Intelligent, ambitious, and confident, Barlow graduated as valedictorian of the 1855 Harvard class and launched a legal career in New York. When Lincoln sent out a call for volunteers following the bombardment of Fort Sumter, Barlow dropped his practice and entered the U.S. Army as a private. He transformed himself from a privileged young lawyer into one of the most formidable combat leaders produced by either side during the Civil War. Rising from private to major general, Barlow served in most major operations in Virginia and was increasingly entrusted with assignments of crucial importance to the success of Federal arms. He cleared out the deadly sunken road at Antietam, where he was badly wounded, and led a division at Gettysburg, where he suffered another serious wound. He and his men often spearheaded the Arm of the Potomac's assaults during Grant's bloody Overland campaign. Following the war, Barlow resumed his law practice and entered the political arena. He served as New York attorney general in 1871 and as Grant's personal representative in the Florida recount following the contentious 1876 election. This book will be welcomed by Civil War historians and buffs alike." (Inventory #: 3608)
$20.00 add to cart Available from Bay Leaf Books
Share this item