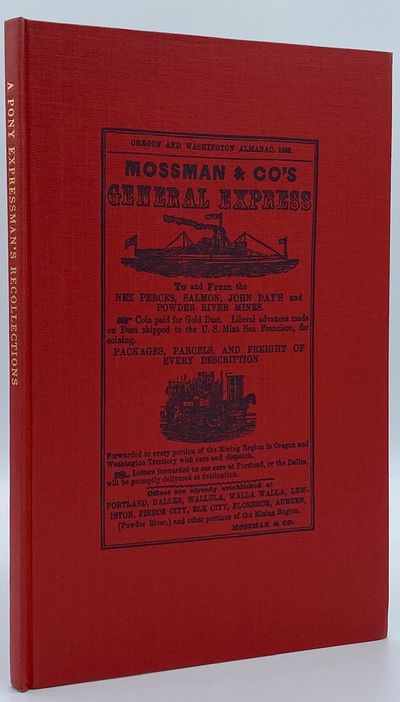 by Mossman, Isaac Van Dorsey
[Portland]: Champoeg Press, 1955. 55pp. Octavo [22 cm] Red cloth with a Mossman & Co. advertisement printed in black on the front board. Near fine. Fold-out map at the rear present. Mounted photo frontispiece present. Designed and printed by Lawton Kennedy in an edition of 500 copies. "A Pony Expressman's Recollections, by Isaac Van Dorsey Mossman, was originally published under the title, Crossing the Plains. Since only a small portion of the text deals with overland travel, it was retitled to be more consistent with the contents. The reminiscences cover a period of fourteen years, 1853 to 1867. During this time, important events in Pacific Northwest history took place, and Mossman was a participant in several of them." - from the introduction. (Inventory #: 4059)
$20.00 add to cart Available from
Tschanz Rare Books
Share this item