The Old California Trail: Traces in Folklore and Furrow 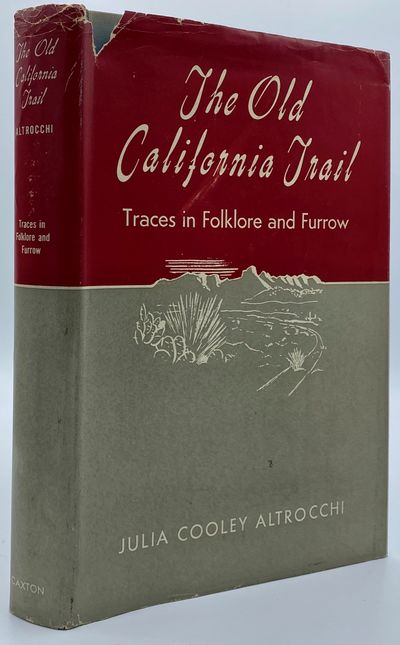 by Altrocchi, Julia Cooley
Caldwell: The Caxton Printers, 1945. First Edition. 327pp. Octavo [23.5 cm] Blue cloth with the title in red on the front board and backstrip. Very good/Very goods. A few small chips to the jacket with loss. Minor sunning to head of boards. Map endsheets and pastedowns. "Though many books have been written about the Oregon Trail, no book has yet appeared which concerns itself wholly with the California Trail (including the Donner Trail) from Independence to Sacramento, and none which deals with the folklore as well as with the actual furrows of this old road of freedom. Julia Cooley Altrocchi has followed this particular covered-wagon route seven times, talking with hundreds of old-timers, collecting the 'tall tales,' and studying the recurrent facts or fictions in the process of becoming folklore - from the shimmering legends of buried gold to the terrible legends of the man-flayed-alive." - from the jacket. (Inventory #: 4029)
$20.00 add to cart Available from
Tschanz Rare Books
Share this item