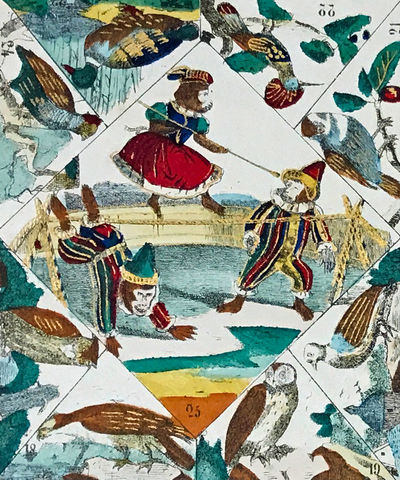 by [GAMES]
Wissembourg: Wentzel, 1860. Striking nineteenth-century zoological board game, a broadside with instructions printed in both French and German. The game requires players to name each animal as they work their way around the board, from familiar domestic and woodland creatures to exotic beasts (an elephant, a tiger, a lion) to the central troupe of acrobat monkeys in fancy dress. The game was printed by the Wentzel family of lithographers in Wissembourg on the German border, and sold at their Parisian outpost on the rue St. Jacques. The Paris shop was established in partnership with a French printer in the 1850s, and acquired outright by the Wentzels in 1865, at the height of their business. In a grim turn of events, the outbreak of the Franco-Prussian War in 1870 would result in the death of many of the marquee animals in the Paris zoos, including the celebrated elephants Castor and Pollux, slaughtered for food during the siege of the city. OCLC locates one institutional holding, at the Bibliotheek Universiteit van Amsterdam. A near-fine and scarce survival. Lithographic broadside, printed recto only, measuring 15.75 x 11 inches. Hand-colored en pochoir with gilt highlights. "No. 70" printed at top right corner; instructions printed below game board. Faint center crease, lightly browned at edges. (Inventory #: 1002684)
$850.00 add to cart or Buy Direct from Honey & Wax
Share this item
Honey & Wax Booksellers
Offered by