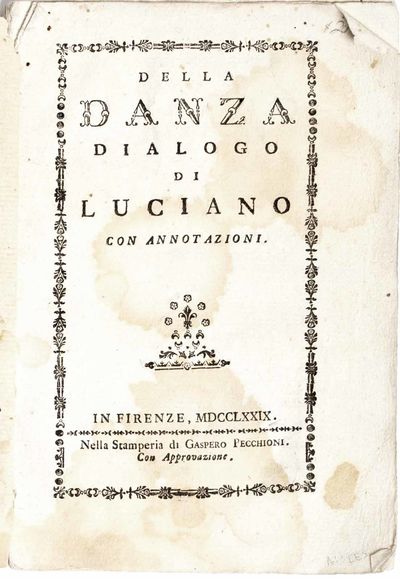 In Firenze : nella stamperia di Gaspero Pecchioni, 1779. Original edition. 8vo. Old wrappers iv, 44 p. Some stains to titlepage. Very good copy. In this dialogue the Cynic Crato, who has no in pantomimic dancing or those who go to see it, is converted to its appreciation by his friend Lycinus.
This is a translation into Italian with notes of Lucian's famous dialogue on pantomime or "tragic dancing" in ancient Greece. In "tragic" dancing a dramatic plot is enacted by a masked and costumed dancer, supported by an actor. The dancer's lines are spoken for him by someone else. There is also a chorus, and, for accompaniment, the flute and the syrinx, with various instruments of percussion. The work is dedicated to Antonio Muzarelli who was ballet master at the Burgtheater in Vienna at a time when ballet was detested by Emperor Joseph II, although the art form was gaining some popularity due to the reforms of Jean-Georges Noverre (29 April 1727 – 19 October 1810), the a French dancer and balletmaster generally considered the creator of ballet d'action. The dialogue was probably written in Antioch in 162–165 a.d., when the Emperor Verus was there, in compliment to him because of his interest in pantomime, at a time when visual art was held inferior to literary art. This work underscores the legitimacy of dance because Lucian recognizes the intellectual character of dance. He emphasizes that a dancer must be able to express his or her ideas and sentiments through the intelligibility of movement and posture. Lucian's dialogue on dancing remains popular today due to its clever dialogue and clarity of argument. Rare: two OCLC locations, one in North America: NYP (Inventory #: 983821)
$450.00 add to cart Available from Golden Legend
Share this item
Golden Legend, Inc.
Offered by

New York : Graham's Magazine , 1849
(click for more details about Opera Extravagance Engraved for Grahams Magazine)
View all from this seller>