Bertram; or, the Castle of St. Aldobrand, an Italian Tale, on Which Is Founded One of the Best Tragedies of Modern Times. 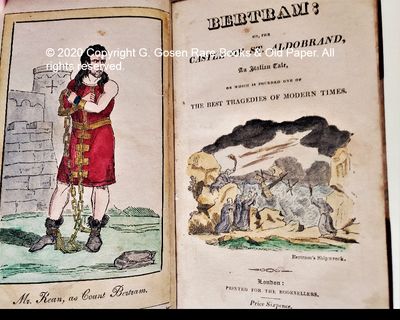 by [Byron] Maturin, Rev. Robert Charles
[Byron] Maturin, Rev. Robert Charles, Bertram; or, the Castle of St. Aldobrand, an Italian Tale, on Which Is Founded One of the Best Tragedies of Modern Times. London: Printed for the Booksellers, Price Sixpence, no date, [1816]. Crown 8vo. 27 pages. Hand-colored frontispiece of "Mr. Kean as Count Bertram," a colored vignette on the title page, "Bertram's Shipwreck." A copy with a doubly distinguished provenance, with the armorial book plate of Albert M. Cohn, with the motto, "Lux Dei Ibi Salus"; and, the book plate of Nathan Comfort Starr, Cambridge Massachussets, 1923. Additionally, there is a bibliographic slip pasted in giving the citations for the title in Reid, Douglas and Cohn. Cohn assigned this title 538 in his catalogue raisonné of George Cruikshank, stating, "Coloured woodcut frontispiece and title vignette after G. Cruikshank. The illustrations are also found in an uncolored state." Cohn gives the collation as: "Title + pp (7) – 30." In this copy, 16 blank leaves were bound in behind the chapbook. There is an initial blank Cohn does not mention, nor does he say the verso of the full-length frontispiece of Edmund Kean in fetters is blank. Bound in half dark brown calf over marbled boards and matching endpapers, with gold ruling on the covers and spine, and gold titling on the spine of three compartments, with two raised bands. The front hinge is cracked but holding, otherwise very good. An extraordinary double association copy, with a penciled date of "1816" on the title page. An annotation of "Cruikshank" in pencil is on the verso of the front endpaper.
The stage play on which this author's summary is based was first performed on Thursday, May 10, 1816, at Drury-Lane, its author was Rev. Robert Charles Maturin, son of William Maturin, one of the Clerks of the Roads in Ireland. The postscript adds an interesting connection to Lord Byron: "It was sent by the Author, at the recommendation of Mr. Walter Scott, to Lord Byron … The Noble Poet read it with such admiration that, before he slept, he sent it to the other members of the Committee, requesting them, if they did not agree with him in considering it a most extraordinary work, they would forthwith transmit it to the Managers of Covent Garden, that the deserving Author might have the chance of both Theatres for its acceptance. It was cheerfully accepted, and the Noble Lord the same day, sent the Author a handsome present." (Inventory #: 360)
$1,250.00 add to cart Available from
Gosen Rare Books
Share this item

London : Published by Sherwood, Jones and Co. Paternoster-Row , 1823
(click for more details about POINTS OF MISERY; or FABLES FOR MANKIND: Prose and Verse, Chiefly Original, by Charles Westmacott. Illustrated with Twenty Designs by Robert Cruikshank. )
View all from this seller>