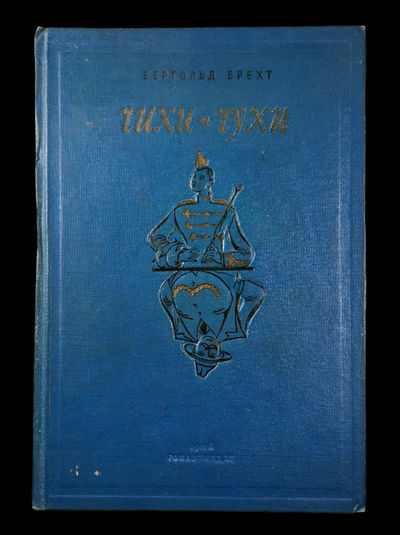 by Brecht, Bertolt
Moscow: Khudozhestvennaia literatura, 1936. Octavo (22 × 15 cm). Original pictorial embossed cloth; 197, [3] pp. Twelve full-page illustrations and thirteen vignettes by Evgenii Kogan, who has signed and inscribed this copy, most likely to the writer Lev Grigorevich Gel'man (1864-1951). Very good. Authorized Russian translation from the German manuscript of Bertold Brecht's play, known in English as "Round Heads and Pointed Heads," written shortly before Hitler was elected Reichskanzler. It has been described as "Brecht's first anti-Fascist play, one of the few which Brecht directed during his years of exile [...] Round Heads and Pointed Heads would become a lightning rod in the literary politics of exile in Moscow" (Stephen Parker, Brecht: A Literary Life, 300-301). While initially conceived as an adaptation of Shakespeare's "Measure by Measure," the rapid growth of National-Socialism prompted Brecht to depart from his original inspiration. The play became a clear parody of the Nazi's demagogery and racial politics, set in the fictive country "Peru" whose inhabitants are divided into "round heads" ("Tschuchen") and the "pointy heads" ("Tschichen"), leading to radicalization and violence. The play's genealogy and reception are complex: scheduling conflicts prevented it from being premiered in Berlin in January 1932. After going into exile in 1933, Brecht rewrote the piece for a performance in Copenhagen, which was cancelled due to censorship concerns; a planned performance directed by Piscator in Moscow in 1935-1936 did not materialize, nor was Brecht able to secure contracts in France. In November 1936, the play premiered in a Danish-language performance; its first German production would come only in 1948. This Russian translation is the first full appearance of the play in print, in any version (an English translation followed in 1937, and the first German edition of the finalized text appeared in 1938). In a curious division of labor, blank verse and prose were translated by Valentin Stenich; couplets and songs by Semen Kirsanov. Both were noted avant-garde poets in their own right. Stenich later fell victim to Stalin's Purges: he was arrested for his well-known anti-Soviet views and shot in 1938. With an effusive inscription by the Soviet artist Evgenii Kogan (1906-1983), a student of Vkhutemas and later Vladimir Favorsky. As a result, the book may subsequently have been removed from circulation. One of 3000 copies. KVK, OCLC show no copies outside of Germany (where it is held by Staatsbibliothek zu Berlin, the Brecht-Archiv at Akademie der Künste, and Deutsche Nationalbibliothek). (Inventory #: P004280)
$850.00 add to cart or Buy Direct from
Bernett Penka Rare Books
Share this item


(click for more details about Lunatichka: poemi [poems])
View all from this seller>