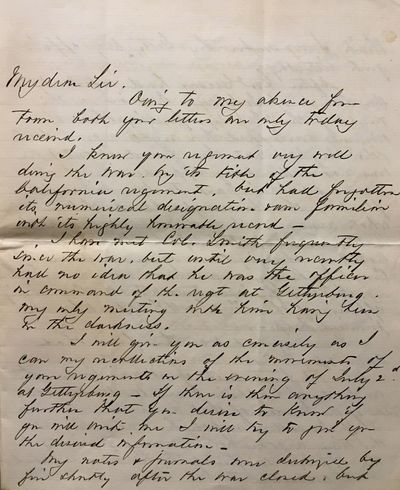 A first-hand account of the significant fight on Culp's Hill from the Battle of Gettysburg, unsigned but likely written by Captain C.P. Horton, Assistant Adjutant-General of the 149th New York Volunteers, being a 7-page handwritten letter in which Horton describes the events of the battle; sold together with a large group of testimonials on behalf of Captain Horton, including a letter from a Boston gentleman attesting to Horton's character, and an official document from Head-Quarters, Northern Department, dated May 6, 1865, revoking Captain Horton's prior dismissal from the army for horse-whipping a subordinate in Cincinnati. Some very slight browning, overall an extremely well-preserved group of documents. Some selected excerpts: "After General Green had repulsed the attack of Johnson's Division, on the night of the 2nd July, finding that the enemy overlapped his right a good deal (tho they had not then found it out) he was naturally very apprehensive of a movement on their part to turn his right flank - the then right flank of the whole army and that they would reach the Baltimore Pike, striking the Park of Reserve Artillery and bringing them square in rear of Cemetery Ridge. He sent for assistance to the Commanding officer of the 1st, 2nd and 11th Corps who all promised help. Your regiment was the first that came up. When I first met it, it was under the conduct of Captain Craig W. Wadsworth...If I recollect rightly he was riding at the time a gray horse, and may possibly be the officer supposed to have been a rebel. I indicated to Col. Smith the route he was to take and rode forward with Captain Wadsworth to the position intended for the regiment." "Finally the regiment was posted to the right rear of Green's line of battle. If you look on the map for the position of Kanes Brigade, the 2d of 2d div 12th Cl and move back, probably about 100 yards from their left you will get approximately your position. The idea was that the enemy would soon get round Green's right in some force and that then you and the regiments expected every minute for the 1st and 11th Corp would in turn back them in the flank. In the darkness and in a country strange to the enemy a small force would probably have them into confusion if attacking unexpectedly. The position was a most important one and was explained I think further to Col. Smith." "Your regiment, if I remember rightly, gave a cheer and advanced a few yards in line, to the place it had selected for it. I have since heard that the clang was heard by the enemy, who supposed our right was reinforced, and that it rendered them more cautious in their after movements on our right. There was apparently at the time no enemy in our front or on your flank. I then rode to Green's line, thus engaged with Ewell." Culp's Hill, approximately 3/4 of a mile south of the center of Gettysburg, Pennsylvania, played a major role in the Battle of Gettysburg. During that battle, from July 1 through 3, 1863, Culp's Hill served as a critical part of the Union Army defense, forming the main portion of the army's right flank. Culp's Hill was first occupied by Union troops on the night of July 1st, 1863, along with neighboring Cemetery Hill, as a rallying point. That night, believing Culp's Hill to be unoccupied and a good potential target, Lt. General Richard S. Ewell sent a small Confederate party led by Major General Edward Johnson to scope out the area. His men unexpectedly encountered the 7th Indiana Infantry of the I Corps, and Johnson's party was almost taken prisoner before they were able to flee. The failure of the Confederates to take Culp's Hill or Cemetery Hill that night is considered to be one of the great missed opportunities of the Battle of Gettysburg. By the morning of July 2nd, additional Union troops had arrived to Culp's Hill for fortification, and it became the only hill on the battlefield that was attacked in some way on all three days of the Battle of Gettysburg. The forces involved in most of the fighting were Johnson's Confederate division (Stonewall Jackson's former command) and Union troops of the 12th Army Corps under Major General Henry Slocum. The evening of July 2nd, most of the Union forces which were defending the hill were ordered to go support the Union left. The Confederates noticed the Union forces leaving and attacked under instructions from General Lee. 1,424 Union troops were set to face nearly 5,000 Confederate soldiers, most likely the best advantage numerically that the Confederates had at any point during that battle and their best chance for victory. The fighting on Culp's Hill on July 3rd lasted for 7 hours and involved 22,000 soldiers. Over one-fifth of all of the lead fired during the Battle of Gettysburg, well over a million rounds, was fired on Culp's Hill on the 3rd. The fight for Culp's Hill was significant because it guarded the main Union supply line on the Baltimore Pike and the rear of the Union Army on Cemetery Hill. During the battle at Culp's Hill, the 149th New York Volunteer Regiment helped defend the hill, and during those 3 days 6 members of their regiment were killed, 46 wounded, and 3 went missing. (Inventory #: 50734)
$4,500.00 add to cart or Buy Direct from
Bernett Penka Rare Books
Share this item

by Krzysztof Wodiczko and Foksal Gallery

by Partum, Andrzej and Galeria Pro/la