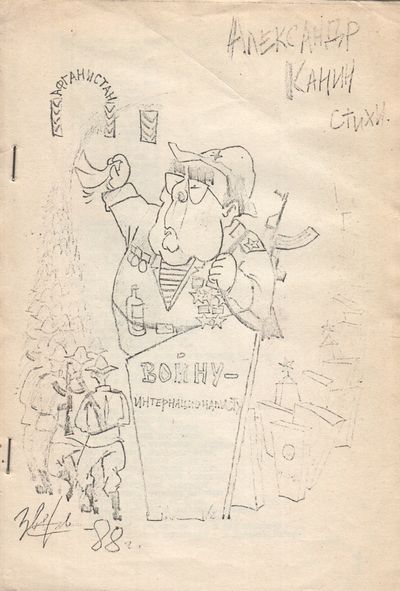 by Kanin, Aleksandr
Moscow: self-published, 1989. Octavo (21 × 14.5 cm). Original side-stapled pamphlet; illustrated xeroxed wrapper, reproducing a drawing by F. Zverev, and 8 leaves of text to rectos only; xeroxed photo-reduced typescript. Signed and inscribed by the author on the first page. Private bookplate to front wrapper verso. Wrappers and text somewhat creased; else good or better. Scarce perestroika-era samizdat, by an unknown poet from Moscow's Arbat District. The front wrapper consists of a drawing by F. Zverev, dated 1988, depicting Brezhnev waving goodbye a batallion of Soviet soldiers headed for Afghanistan, a Kalashnikov slung over his sholder and a bottle of vodka tucked into his belt, while countless coffins are lined up to the other side of his lectern. Written between 1979 and 1988, these poems direct their often venomous attention at such varied subjects as the Soviet Writers' Union, the KGB, Brezhnev, Yeltsin, and the war in Afghanistan. Despite certain poetic imperfections, they are a fascinating document of a mind frantically preoccupied with Perestroika's effect on the country; one of the poems is subtitled: "dedicated to the future victims of Perestroika." A rich source for future students of late Soviet underground wit. We have previously handled a version of this text, which featured a different drawing by F. Zverev on the front wrapper. Not in KVK, OCLC (the British Library holds another Kanin's "Arbatskii zagovor," or Arbat Conspiracy, dated 1989). (Inventory #: P6052)
$450.00 add to cart or Buy Direct from
Bernett Penka Rare Books
Share this item


(click for more details about Gersaint&#367;v &scaron;tít [Signboard for Gersaint])
View all from this seller>