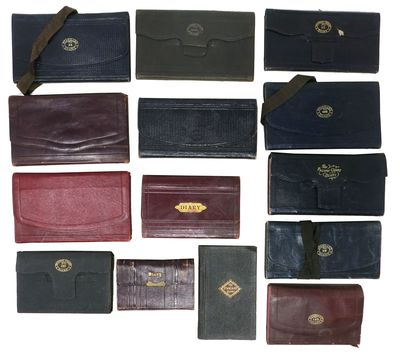 Here offered a group of 14 diaries written by Matilda Hull Cobb Perley for the years 1875, 1876, 1879, 1880, 1881, 1882, 1883, 1884, 1890, 1892, 1894, 1895, 1898 and 1899.Matilda Cobb married Albion Starbird Perley (born March 8, 1843) on February 19, 1873 in Gray, Maine. They had a son Albion Edward (born August 17, 1875) and a daughter Maud (born August 21, 1886). Originally from Maine, throughout the course of the years documented, the family moves from California to Maine and then back to California. In the earliest diary, the couple is living in San Francisco. Matilda records moving into their first house on April 14, 1875, and hosting a housewarming party later that month, where her guests danced and played cards, ate supper and sang. It seems from her notes that her greatest desire is to have a child, and she uses the diary to track her menstrual cycle (indicated by the appearance of an “x” on particular days). Her health, and failure to become or remain pregnant is a frequent topic of entries. For example, “Saturday, May 22, 1875 in bed alone all day read a great deal I wonder what made me sick, can it be another miscarriage. O dear I don’t know.”On August 17, 1876 Matilda delivers a son, known as Eddie. “Baby born at 4 PM. So glad so glad it’s over, glad it’s a boy too.” She appears to struggle with motherhood at first, noting on August 23 “somehow I don’t enjoy this baby much yet, suppose I feel too sick.” By September 2 she writes, “Baby is quite well, that’s a big comfort.” On September 5, however, she “began to tremble in my shoes, at the responsibility I will have resting upon me when auntie Shaw [who came to help with the baby] leaves.”Throughout the rest of the diaries, in addition to comments on motherhood, she records social calls, trips to church and shopping, dinners with friends, illnesses, weddings, births, and funerals of friends and family. From (at least) 1879 to 1883, the family resides in Maine. Matilda marks the end of 1881 with this reflection on December 31, “Have had a great many anxious hours this past year-- good many disappointments-- but Albion and Eddie are with me, well. still have a great deal to be thankful for will look forward to another year with hope.”A very brief note on July 17, 1882 indicates that her husband sought public office, “Albion wants to be senator, is busy enough.” It appears his efforts were unsuccessful according to her entry for July 25, “Republican convention – Albion stayed all night. He had 60 votes. Young(?) 90. Am sorry for him.” In 1883, the Perleys return to San Francisco, traveling by train along a southern route. Stopping in New York on Sunday, March 25, 1883 she writes, “got up at 5 o’clock to see Brooklyn bridge… Went over to Brooklyn to hear Beecher – good time.” After they go through New Orleans, and view the “Rio Grande scenery,” on Sunday, April 1, 1883 they “took breakfast at Deming [New Mexico] -- US troops joined us there – going through to Indian country.” She also remarks that she is “a little afraid of the Indians.”Once back in San Francisco, Matilda’s entries continue to focus on caring for her children and husband, social visits, and keeping house. In all the volumes, there is much description about food preparation -- roast chicken and beef, side dishes, especially potatoes, and many kinds of cakes and pies -- but only one or two detailed ingredient lists. She writes about events such as her son beginning kindergarten, and her daughter’s birthday celebrations. Both children seem to suffer from attacks of “gravel,” (assume this means kidney stones or some sort of bladder ailment), and this concerns her greatly. She takes them on many errands and outings around the city. Those familiar with spring weather in San Francisco will sympathize with statements such as this one from Saturday, April 16, 1892, “Eddie, Maud and I went to the Cliff House for a picnic. O so cold— had a disagreeable day.”In the memoranda section of each diary there are notes on calls made, letters sent, financial transactions, or amusing things that her children have said. Some expenses are listed in the accounts pages at the back of the volumes for purchases of things like fabric, ribbon, and gloves. Some volumes are labeled “Perpetual Diary for the Pacific Coast” and include directories for San Francisco city offices, buildings, churches, telegraph offices, steamship lines and theaters.Regretably, though understandably, Matilda rarely comments on news of the day or political events, and the concerns she writes about are very close to home. Her frequent remarks about being ill and feeling “blue” or “discouraged,” especially in relation to her menstrual cycle, could lead the reader to assume that she suffered from pre-menstrual syndrome or depression. While not a document of the events of her times, these diaries offer a detailed, panoramic and invaluable primary record of a woman’s life as a wife and mother during the late 19th century.  (Inventory #: 47318)
$3,000.00 add to cart or Buy Direct from Tavistock Books
Share this item

The REACH OFFICIAL AMERICAN LEAGUE BASE BALL GUIDE For 1910.; An Annual Compendium of Base Ball Records

Philadelphia : A.J. Reach Company , 1910
(click for more details about The REACH OFFICIAL AMERICAN LEAGUE BASE BALL GUIDE For 1910.; An Annual Compendium of Base Ball Records)
View all from this seller>