My Lady’s Shag Dog!! A Poetical Epistle, From Johnny Bull, in London, to his Brother-in-Law, Patrick Bull, in Dublin. 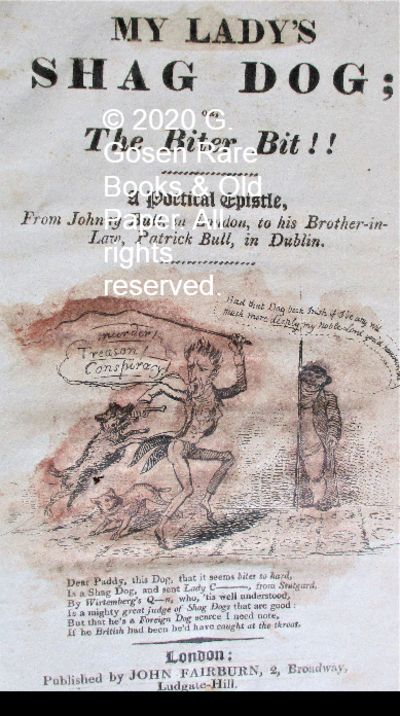 by [Johnny Bull]
[Johnny Bull] My Lady's Shag Dog!! A Poetical Epistle, From Johnny Bull, in London, to his Brother-in-Law, Patrick Bull, in Dublin. London: Published by John Fairburn, 2, Broadway, Ludgate-Hill. Marchant, Printer, Ingram-Court, Fenchurch Street, London. [182?] Price Fourpence. First edition, 15 numbered pages of text, the verso of p. 15 is an advertisement for John Fairburn's publications. 20.5 cm, 8vo. Title page is high-lighted with aquatint on the title and on a vignette of a man (Lord Castlereagh) being attacked by two dogs, while being watched by another man lounging in the shadows. A satire versified about the general discontent in Britain over the repression of the Six Acts passed in August 1819. Castlereagh became the Marquis of Londonderry in 1821. Among the grievances of the author, the suspension of the Writ of Habeas Corpus is referenced in the line, "To bite my Lord C---- now our Habeas' suspended." In a nineteenth century green paper wrapper, never bound, the front cover of the wrapper is signed boldly in pencil by the Gilded Age bibliophile, Ogden Goelet (1851 – 1897). A rare printing, other copies were found at the New York Public Library, University of Delaware and at the British Library. (Inventory #: 365)
$1,500.00 add to cart Available from
Gosen Rare Books
Share this item