Marriage and Parentage: or, The Reproductive Element in Man, as a means to his elevation and happiness 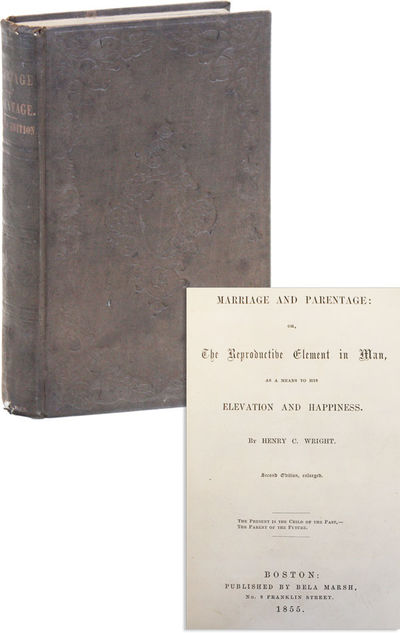 by [WOMEN] WRIGHT, Henry C.
Boston: Bela Marsh, 1855. Hardcover. Treatise on sexual ethics, heredity, and physiology by the enigmatic American abolitionist, suffragist, and freethinker Henry C. Wright. The work discreetly promotes birth control and women's sovereignty over their bodies, reminding male readers that "The pleasure of a moment may take a year out of her life; and shall she have no voice, and never be consulted, as to the functions of her body, the emotions of her soul, and the changes which may, by the birth of children, be made in her eternal destiny?" (p. 255). An underappreciated figure who stood on the periphery of many 19th-century progressive social movements, including radical pacifism, freethought, abolition, and women's rights, Wright's writing fit squarely into no organized political tradition, and so is absent from many bibliographies. However the current work is well-summarized by Hoolihan who describes Wright as occupying "a position regarding non-violence, coercive government, etc. [that] placed him in the most radical camp of the pacifists and even earned him the reputation of being an anarchist." Hoolihan, ATWATER CATALOG 4885 (this edition). Second edition, enlarged from the first edition of 1854. Octavo (19.5cm.); publisher's brown blind-embossed cloth, gilt-lettered spine; 324pp; engraved frontispiece of the author; 2 leaves of plates. Faint tidemark at gutter of frontispiece (just extending into printed area); small chip to cloth at base of spine; still a Very Good, well-preserved copy. Early 20th-c. ink bookseller's stamp of "Powner's Book Shop," Cleveland, to front endpaper. (Inventory #: 49254)
$275.00 add to cart or Buy Direct from
Lorne Bair Rare Books
Share this item