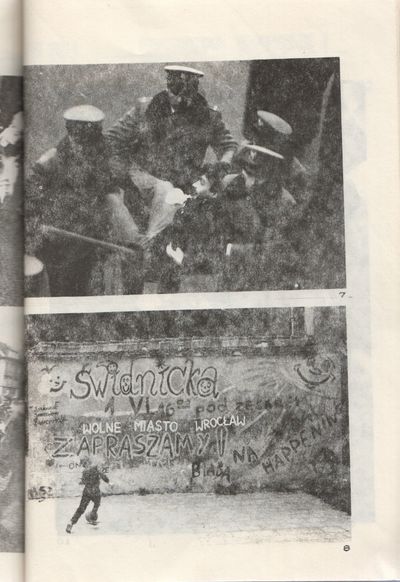 by Fydrych, Waldemar and Bodgan Dobosz
Wroclaw: Inicjatywa Wydawnicza "Aspekt"; Wydawnictwo "Kret", 1989. Octavo (20 × 14 cm). Original pictorial wrappers; 116, [2] pp. of text and 23 black-and-white reproductions. About very good. First edition, published as a samizdat, of this first restrospective work on the Pomarańczowa Alternatywa (Orange Alternative), an originally Wroclaw-based anti-communist artist group. The movement was born out of the student protests at Wroclaw in the early 1980s, and its leader was Waldemar Fydrych (born 1953), known as "Major." The group is perhaps best known for painting little orange gnomes over Solidarity and other anti-State graffiti that had been painted over by the authorities. Never an explicitly political movement, the Orange Alternative instead fused elements of surrealism and dadaism with urban protest in the tradition of Dutch Provo and the kabouters. DIY xerox punk aesthetic, with a drawing showing a bearded male making love to a five-pronged star. The present work provides a "fragmentary history" with historical and political context, a theory of happenings, and reproductions of texts, appeals, and posters by the group. It also contains twenty-three reproductions of posters and photographs of actions and happenings of OA. See also: Happening Against Communism by the Orange Alternative, Krakow: International Cultural Centra, 2011. Monographien im polnischen Zweiten Umlauf, 0617. As of May 2020, KVK and OCLC only show two copies in North America (Cornell and SUNY Buffalo). (Inventory #: 50761)
$275.00 add to cart or Buy Direct from
Bernett Penka Rare Books
Share this item


(click for more details about Lunatichka: poemi [poems])
View all from this seller>