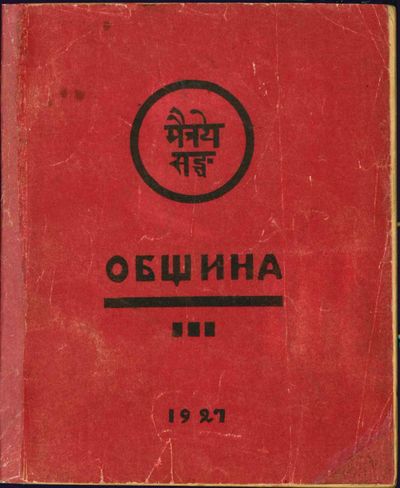 by [Rerikh, Elena Ivanovna]
Ulan Bator, Mongolia: Mongol'skaia tipografiia, 1927. 12mo (15.3 × 12.5 cm). Original side-stitched red printed wrappers; [4], 284 pp. In recent red clipcase. Light overall wear; wrappers rebacked and rear wrapper replaced; small professional paper repairs; still a good copy of a fragile publication. Extremely rare first edition of Book Three in the Agni Yoga series written by the Russian esoteric philosopher Elena Roerich during her "Asiatic journey" (with her husband, the artist Nicolai Roerich) through Mongolia, Tibet and the Himalayas in 1925-1928. The book articulates the occult origins of Marxism-Leninism, with this first edition specifically targeting the readers of Soviet Russia. Roerich wrote the text from an alleged telepathic "dictation" by Master Morya, one of the masters of ancient wisdom central to Theosophical belief, as set down in her diary entries from June 1925 - March 1927. Addressed to the worker the introduction asks: "O worker, do the foundations of cooperation and community burn in your mind? If this fire has enlightened your mind already, take in the teachings of our mountains." The text subsequently refers to Lenin as a true prophet and teacher for placing greatest value in community and for breaking with the past. It also refers to conversations between the mahatmas (masters of ancient wisdom) and Marx, who was the first to allegedly hear their call for community in the West. According to the Roerich Museum in Moscow, a second edition of this text was published in Riga in 1936, with most of the references to Marxism-Leninism removed, likely for political reasons. The cover of the Riga edition confusingly (or with intentional obfuscation) indicated 1926, the year of the completion of the bulk of the text, as the year of publication. An English translation of the Riga edition was published in 1951. The bulk of the print run and possibly the entire remainder of the first edition was reportedly burned at the printer attached to the Russian consulate in Ulan Bator. The personal copy of the first edition, as well as Elena Roerich's manuscripts are held by the Roerich Museum in Moscow. The books of the Agni Yoga series were crucial to the spread of New Age philosophy in post-Soviet Russia with many new editions printed after Soviet collapse. A number of organizations and museums are devoted to spreading the Roerichs' teachings to this day. No copies found in KVK, OCLC. Not in the Russian National Library. (Inventory #: 50629)
$1,750.00 add to cart or Buy Direct from
Bernett Penka Rare Books
Share this item

by Krzysztof Wodiczko and Foksal Gallery

by Partum, Andrzej and Galeria Pro/la