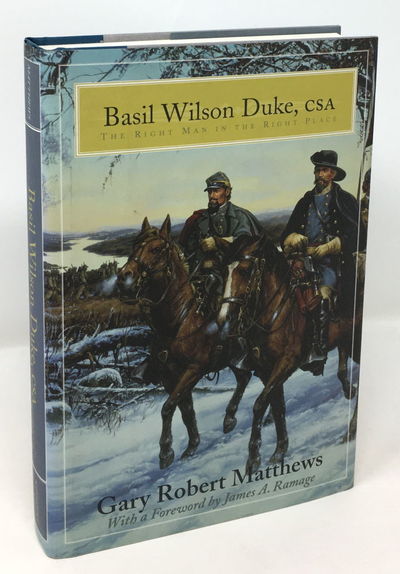 by Matthews, Gary Robert; James A. Ramage, foreword
Hardcover with dust jacket, grey paper over teal cloth spine with silver spine titles, 16 by 24.2 cm, xviii 358 pp. Near fine, unread copy with only faint signs of shelf wear and a tiny, faint spot on the fore-edge of the textblock. From the publisher: "By the early twentieth century, Basil Wilson Duke had established himself as one of Kentucky's most popular storytellers, but unlike many other talented raconteurs, Duke was not merely a man of words. In Basil Wilson Duke, CSA, the first full-length biography of this distinguished American, Gary Robert Matthews offers keen insight into the challenges Duke faced before, during, and after the strife of the Civil War. As first lieutenant of General John Hunt Morgan's legendary band of Confederate raiders, Duke became Morgan's most trusted advisor and an integral contributor to his dramatic tactical successes. Duke was twice wounded in battle and was captured during a raid in Ohio in 1863. Held captive for over a year, Duke rejoined Morgan's cavalry in August 1864, only days before Morgan (who was Duke's brother-in-law) met his demise in Greeneville, Tennessee. Promoted to brigadier general and appointed commander of Morgan's men, he helped convince Jefferson Davis of the futility of continued resistance at the close of the war and was assigned to the force escorting Davis in his escape. Duke's life of action and achievement, however, did not end with the war. He wrote A History of Morgan's Cavalry, preserving for posterity the experiences of his fellow warriors, and covered for the Louisville Courier-Journal an 1875 horserace that would eventually be known as the first Kentucky Derby. He built a reputation as a skilled historical writer, and his interests led him to help found the Filson Historical Society in Louisville. Duke also applied his talents to public and political life. He opened a law office and was elected as a Democrat to the Kentucky House, where he served until 1870. Then applying his legal expertise and political connections at the state and national levels, Duke represented the powerful L&N Railroad as the company's chief lobbyist in the aftermath of the war and during the emotionally charged era of Reconstruction. Gary Robert Matthews's comprehensive study of the life of Basil Wilson Duke allows a great soldier and statesman to step out of the shadows of the past." (Inventory #: 3619)
$18.00 add to cart Available from Bay Leaf Books
Share this item