The Hound of the Baskervilles; Another Adventure of Sherlock Holmes 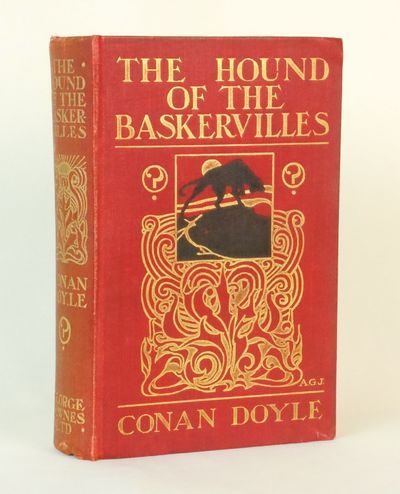 by Doyle, A. Conan; Paget, Sidney (Illustrations)
London: George Newnes, Limited, 1902. First Edition. Hardcover. Very good. Paget, Sidney. First printing, duodecimo size, 367 pp. Sir Arthur Ignatius Conan Doyle (1859-1930) introduced the world to Sherlock Holmes and Dr. Watson via "A Study in Scarlet" which was published to "enthusiastic review". More stories would follow, and although Doyle "most wanted to be remembered as a champion of spiritualism and as a historical novelist, it is Sherlock Holmes who has continued to capture the imagination of the public." "The Hound of the Baskervilles" allowed Doyle to offer the public another Sherlock Holmes story after the apparent fall to his death with Professor Moriarity down the Reichenbach Falls by placing the story in a setting before the supposed death. It remains a favourite with Holmes fans' to this day; in 1999, it was listed as the top Sherlock Holmes' novel by Sherlockian scholars and has been adapted almost countless times on the stage and screen. The illustrations are by Sidney Edward Paget (1860-1908) who was best know for his work with the Sherlock Holmes stories published in The Strand Magazine; between the years 1891 and 1904 Paget provided 356 illustrations for thirty-eight Sherlock Holmes stories. ___DESCRIPTION: Publisher's decorated trade binding signed by "A.G.J." (Alfred Gareth Jones) with a depiction in black and gilt of a hound against a moon upon a hilltop, the illustration surrounded by a gilt floral design, gilt lettering on both the front and spine, the spine with gilt decorations, a total of sixteen monochrome illustrations by Sidney Paget tipped in, first edition error on p. 13, line 3 as called for in the bibliography; duodecimo size (7.5" by 5.25"), pagination: [i-viii] 1-359. Lacking the dust jacket which is seldom, if ever, seen. ___CONDITION: Overall a very good copy, with the binding mostly clean (some light overall soil), the top corners gently bumped but unrubbed, the bottom corners straight with a minimal amount of rubbing, the text block strong with solid hinges, the interior clean (other than a single spot of light soil on one page) and bright, the sole prior owner marking being an embossed vintage bookseller's stamp at the top corner of the front free endpaper ("W.H. Smith & Son, London"); some light rubbing to the gilt and black on the front cover but better than often found, the spine also with light rubbing to the gilt and some sunning, a small amount of wear to the head and tail of the spine with a very short tear to the cloth at the head, book slightly cocked, some offsetting or light foxing to the endpapers, and several leaves (approximately seven) where the outer top corner of the page shows some loss, none with loss of text, a few other leaves with creases from prior turned-down corners; note that the plate at p. 250 has been supplied and was tipped in by a professional, the book now collates complete. With its few faults still a handsome, very good copy of a classic Sherlock Holmes story. ___CITATIONS: Green and Gibson no. A26a; Oxford DNB online; the web site of Arthur-Conan-Doyle. ___POSTAGE: International customers, please note that additional postage may apply as the standard does not always cover costs; please inquire for details. ___Swan's Fine Books is pleased to be a member of the ABAA, ILAB, and IOBA and we stand behind every book we sell. Please contact us with any questions you may have, we are here to help. (Inventory #: CNMKYB01)
$3,850.00 add to cart or Buy Direct from
Swan's Fine Books
Share this item

Boston : Roberts Brothers , 1871
(click for more details about Little Men; Life at Plumfield with Jo's Boys)
View all from this seller>