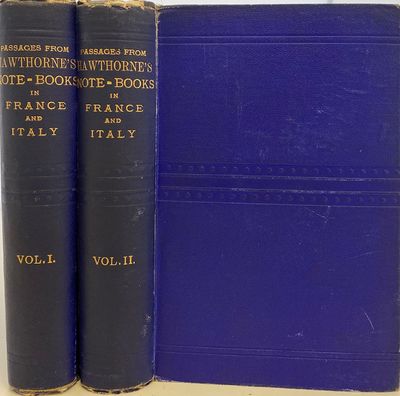 by [HAWTHORNE, Nathaniel]
London: Strahan & Co. Publishers, 56 Ludgate Hill, 1871. First British Edition. Cloth. Very good. First British edition. Two volumes. 8vo; 371pp, 368pp + 4pp ads; binding variant A (ABL 7635), blind-stamped blue cloth over board, gilt-stamped title to spine; navy blue endpapers; scuffing to edges, book plate to front pastedown both volumes, cracking of back hinge paper but holding; very good. From the library collection of Jacob Chester Chamberlain (1860-1905), both volumes have his engraved bookplate affixed to the front pastedown. Chamberlain, a British citizen born in India, immigrated to the United States in 1872. He was a noted electrical engineer who worked with Thomas Edison at his New Jersey lab. He was responsible for the early work in electrifying the U.S. capitol building and the lighting of the Hudson River Tunnel. He also developed storage batteries for street cars and was involved in early refrigeration work. He was considered to be a preeminent collector of first edition American authors, and was a member of the Grolier Club. These volumes are Hawthorne's descriptive travel diary from his trips to France and Italy. (Inventory #: 972)
$350.00 add to cart Available from
Sandra L. Hoekstra
Share this item

Dame Wiggins of Lee and Her Seven Wonderful Cats: A Humorous Tale Written Principally by a Lady of Ninety, Edited, with Additional Verses, By John Ruskin, L.L.D., Sunnyside

Orpington, Kent : George Allen , 1885
(click for more details about Dame Wiggins of Lee and Her Seven Wonderful Cats: A Humorous Tale Written Principally by a Lady of Ninety, Edited, with Additional Verses, By John Ruskin, L.L.D., Sunnyside)
View all from this seller>