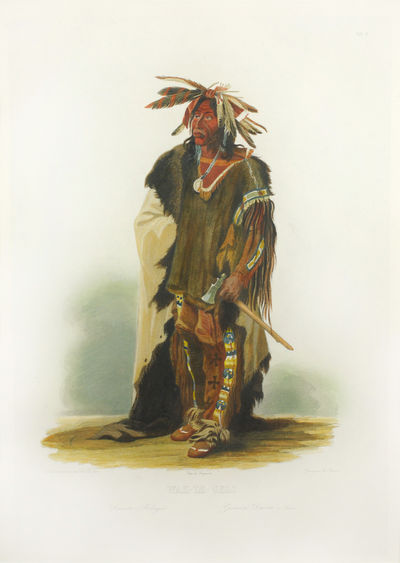 by Bodmer, Karl.
London: Ackermann & Co. 1839. Aquatint engraving with contemporary hand-coloring, 24.6 x 18 inches, with blindstamp "C.Bodmer/Direct". Fine condition. § First edition, an illustration from the celebrated book, Travels in the Interior of North America, 1832-1834, by Maximilian, Prince of Wied, Germany, after Bodmer's watercolors.Prince Maximilian was a German explorer and naturalist who hired the Swiss artist Karl Bodmer (1809-1893) for an expedition to examine and describe the wildlife and Indian tribes of the American West. For 13 months, the men travelled up the Missouri River from St. Louis to Montana, recording the people and landscapes they encountered with unprecedented sensitivity and detail, just on the eve of rapid white Western expansion and genocidal conquest. "For over a century Bodmer's aquatints have been regarded as one of the most significant contributions to the iconography of the western frontier." In his portraits of American Indians, Bodmer "achieved a level of accuracy and sensitivity that no other artist of the American frontier has ever surpassed. His work is particularly valuable for its detailed rendition of the Indians' ornamentation, attire, and implements. Indeed, Bodmer was far superior to his better-known contemporary George Catlin, whose work lacks the Swiss artist's fidelity and meticulous attention to detail." (American Dictionary of National Biography). (Inventory #: 123257)
$3,000.00 add to cart or Buy Direct from
John Windle, Bookseller
Share this item

Remember Me! A New Years Gift or Christmas Present, 1826.


(click for more details about Vernal Falls, Yosemite National Park.)
View all from this seller>