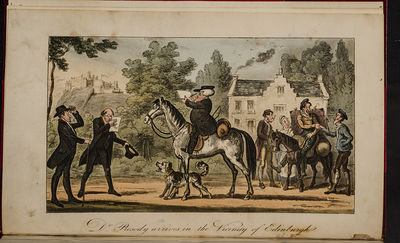 first edition
by WILLIAMS, Charles, illustrator; READ, William, illustrator; PROSODY, Doctor; SYNTAX IMITATION
London: Matthew Iley, 1821. Twenty Humorous Hand Colored Plates by Charles Williams and William Read [WILLIAMS, Charles, illustrator]. [READ, William, illustrator]. The Tour of Doctor Prosody, in Search of the Antique and Picturesque, through Scotland, the Hebrides, the Orkney and Shetland Isles; Illustrated by Twenty Humourous Plates. London: Matthew Iley, 1821. First edition. Octavo (9 x 5 3/4 inches; 229 x 146 mm.). [iv], [1]-251, [1, blank] pp. plus twenty hand-colored aquatint plates drawn and engraved by Charles Williams and William Read as stated. Small neatly repaired 1/2 inch marginal tear on pp. 75/76 not affecting text. Bound by Morrell of London ca. 1940 for Sotherans (stamp-signed in black on verso of front freee endpaper) in three-quarter red morocco over red cloth boards, ruled in gilt. Spine with five raised bands decoratively ruled and lettered in gilt in compartments, marbled endpapers, top edge gilt. Upper joint slightly cracked but still sound, otherwise near fine. Published in the school of Rowlandson's Doctor Syntax, this is a famous satire on Samuel Johnson's Tour of the Hebrides. Illustrator Charles Williams (b.? - 1830) was a British caricaturist, etcher and illustrator. Between 1799 and 1815 he was chief caricaturist for S.W. Fores, a prominent British publisher of prints. He worked in a style similar to James Gillray. His early work is published under the name 'Ansell' but the later is usually anonymous." With George Cruikshank and others he illustrated The Every-Day Book by William Hone, edited 1825-26. In addition to the work under notice he illustrated Dr Syntax in Paris (1820); My Cousin In the Army (1822); and The Tour of Doctor Prosody (1821). Abbey, Life, 277; Tooley 433. (Inventory #: 04854)
$850.00 add to cart or Buy Direct from
David Brass Rare Books
Share this item