Why the Fiery Cross was Burned at Jackson's, and It Was Not the Ku Klux Klan That Did It 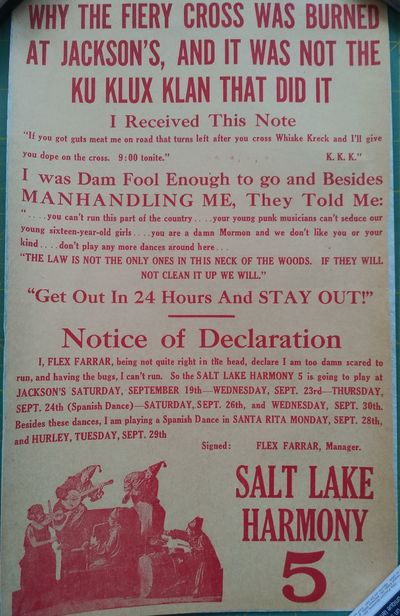 [New Mexico], 1925. Handbill advertising a performance of the Salt Lake Harmony 5 at Jackson's (likely Silver City or Truth or Consequences, New Mexico). Printed entirely in red on thin wood-pulp paper, measuring 19 cm x 31 cm. Small reproduction photograph of the group at foot. Band leader Kathryn Farrar ("Utah's Girl Wonder Violinist") is not mentioned in the copy, but is featured in the photo. Small crease to lower left corner, else perfectly crisp and unworn. Archivally backed. An original advertising concept indeed, making use of anti-Mormon sentiment, the KKK, and "having the bugs." Full text reads: WHY THE FIERY CROSS WAS BURNED AT JACKSON'S, AND IT WAS NOT THE KU KLUX KLAN THAT DID IT. I Received This Note: "If you got guts meat me on road that turns left after you cross Whiske Kreck and I'll give you dope on the cross. 9:00 tonite." K.K.K." I was Dam Fool Enough to go and Besides MANHANDLING ME, They Told Me: ". . . .you can't run this part of the country . . . . your young punk musicians can't seduce our young sixteen-year-old girls . . . . you are a damn Mormon and we don't like you or your kind . . . . don't play any more dances around here . . . "THE LAW IS NOT THE ONLY ONES IN THIS NECK OF THE WOODS. IF THEY WILL NOT CLEAN IT UP WE WILL." "Get Out in 24 Hours and STAY OUT!" Notice of Declaration: I, Flex Farrar, being not quite right in the head, declare I am too damned scared to run, and having the bugs, I can't run. So the SALT LAKE HARMONY 5 is going to play at JACKSON'S SATURDAY, SEPTEMBER 19th-WEDNESDAY, SEPT. 23rd-THURSDAY SEPT. 24th (Spanish Dance)-SATURDAY, SEPT. 26th, and WEDNESDAY, SEPT. 30th. Besides these dances, I am playing a Spanish Dance in SANTA RITA MONDAY, SEPT. 28th, and HURLEY, TUESDAY, SEPT. 29th. Signed: FLEX FARRAR, Manager. SALT LAKE HARMONY 5. Kathryn Farrar left her abusive home on a Butte, Montana farm when she was fifteen. She supported herself with her violin, eventually teaming up with fellow violinist Flex Farrar, who would play in and manage her band, the Harmony 5 Orchestra (also known as the Salt Lake Harmony 5). Farrar toured widely in the 1920s, and made Salt Lake City her home base. After Flex died from food poisoning, Farrar married a nightclub owner. Her grand-daughter is the 1970s fashion model Kathy Davis. (Inventory #: 52576)
$450.00 add to cart or Buy Direct from
Ken Sanders Rare Books
Share this item

To the Family of Herbert S. Auerbach. In the passing of your brother The Old Folks Central Committee is called upon to part with a friend and associate who was loved for his genial personality and generosity, and respected for his honesty and integrity

by [In Memoriam] [Herbert S. Auerbach]


(click for more details about To the Family of Herbert S. Auerbach. In the passing of your brother The Old Folks Central Committee is called upon to part with a friend and associate who was loved for his genial personality and generosity, and respected for his honesty and integrity)

by Felkner, Lottie and Mildred Larsen