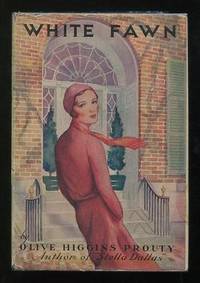 by Prouty, Olive Higgins
New York: Grosset & Dunlap. Very Good+ in Very Good dj. (c.1931). Reprint. Hardcover. [solid clean copy, light shelfwear; jacket lightly edgeworn, with some minimal chipping at spine ends, one tiny puncture-tear along front hinge]. The story of a romance between the debutante daughter of Bostonian bluebloods and the "poor if brilliant doctor's assistant without breeding, money, or background" (all of which the daughter, Fabia Vale, has in spades). This novel is often described as a "prequel" to one of Mrs. Prouty's most famous works, "Now, Voyager" (1941), but to be a bit more accurate about it, "White Fawn" was the first installment in a cycle of five books ("Now, Voyager" being the third), published over a twenty-year span, that chronicled the fortunes of the Vale family, the author's fictional Boston aristocrats. Doomed romance seems to have been at least one through-line of the series: the final book, "Fabia" (1951), follows the title character through yet another unhappy affair with yet another doctor. (For those who are curious about the genealogical aspects: Fabia was the daughter of Rupert Vale and his wife Lisa (the second book in the cycle, "Lisa Vale," centers on *her* troublesome affair); Charlotte (the protagonist of "Now, Voyager," so memorably portrayed by Bette Davis in the 1942 movie version) was Rupert's sister, hence Fabia's "spinster aunt." The domineering dowager who's the mother of this clan is apparently never granted a name by her creator: she is consistently referred to in the books as either "Grandmother Vale" or "Mother Vale," depending on the context.) Surprisingly uncommon, given that OHP had been a best-selling author for years at the time of its initial publication, most notably for "Stella Dallas," already made into a popular movie. NOTE that the book's title page bears only the imprint of the book's original publisher, Houghton Mifflin, although both the book's spine and the dust jacket are Grosset & Dunlap; the jacket illustration (uncredited) is identical to that of the Houghton Mifflin edition. . (Inventory #: 25588)
$300.00 add to cart Available from ReadInk
Share this item
ReadInk
Offered by