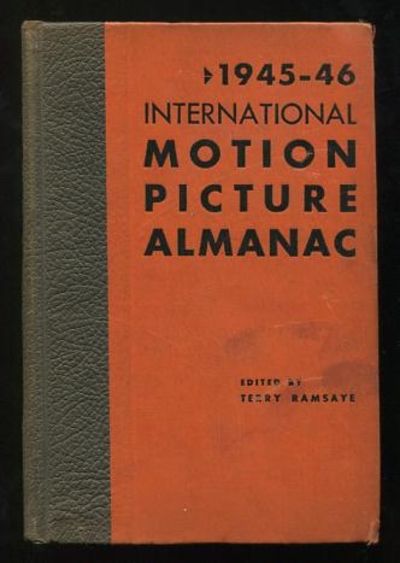 by Ramsaye, Terry, ed.
New York: Quigley Publishing Company. Good. (c.1945). (17th Annual). Hardcover. (no dust jacket, as issued) [front hinge cracked (not untypical with these heavy volumes), small scrape along edge of rear cover (with about 1-inch exposure of board), bumping/slight fraying at a couple of corners, a little staining on the front cover; all in all still a decent reference/research copy] (B&W photographs, advertisements) Biographies, directories, statistics, surveys, etc., focusing primarily on the American film industry but justifying its "International" titling by including sections on the British and Latin American film markets. This volume was the last issued during World War II, which of course caused great disruption to the international film marketplace; as publisher Martin Quigley puts it in his introductory note, it was "the greatest period of social, political and industrial readjustment in all history." The sections of the book are: Who's Who (comprising a little less than half of 60% of the volume's 970 pages); Motion Picture Corporations (including personnel and financial statements); The Motion Picture in the War; Industry Facts and Events of 1942-43; Services; Theatre Circuits; Pictures (brief credits, release dates and running times for features, 1937-1945, with lists of short subjects and foreign film imports); Organizations; Codes and Censorship (including the full text of the Motion Picture Production Code); British Film Market; Latin America; The Motion Picture in Education and Industry; Theatre Equipment, Materials and Furnishings; Television and Radio; The Press; Consent Decree (including the full text thereof). Interspersed throughout are advertisements for both companies and individuals. **** NOTE that additional shipping charges will be requested for international shipping of this heavy book, or for Priority Mail service to U.S. destinations. If this concerns you, please contact us for a shipping quote before placing your order. **** . (Inventory #: 25597)
$25.00 add to cart Available from ReadInk
Share this item
ReadInk
Offered by