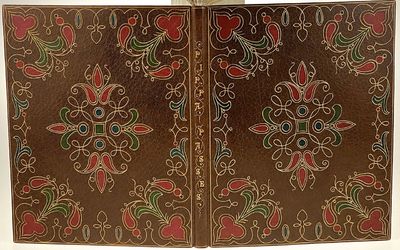 by Browning, Robert
London: Duckworth & Co, 1898. First edition thus. Exquisitely bound in full chestnut brown morocco by The Hampstead Bindery, measuring 9 x 7 inches, and most likely the work of its master binder, P.A. Savoldelli, as per comparison with bindings in "The Bindings of Tomorrow," Anstruther, The Guild of Women Binders, 1902. Hampstead Bindery in 1898, founded by Frank Karslake, who concurrently had founded the Guild of Women Binders, The Hampstead Bindery was a platform for galvanizing the bookbinding careers of P.A. Savoldelli, and others. Hampstead's early prospectus declared, "Its workmen are professionals of great experience in the best English and Continental ateliers. Every book that is bound is never repeated unless ordered." A magnificent binding, with ornate and swirling gilt tooling with over 80 fabulous inlays on both covers in crimson, blue, and green, featuring an arabesque center and border design, flanking by elegant scroll and blossom design work. Vertical gilt title and stippling to spine. Doublures decorated in a striking and extremely complicated and aesthetically pleasing pattern consisting of dozens of intricate inlay work in two colors consisting of a circular purple and gold inlaid Grolieresque design, surrounded with a very detailed gilt-stippled pattern and gilt roundlets. Vellum free endpapers, with paper backing slightly wrinkled, as is standard. Limited to 60 copies on Japan vellum, of which this is #21. Illustrated by Leslie L. Brooke, with seven full-page illustrations and ornament on title page and last page of text, all of which have been delicately hand-colored. Very slight rubbing to corners. Housed in the original felt-lined slipcase (worn), with gilt title to spine, which has allowed this spectacular example of arts & crafts bookmaking by Savoldelli, Frank Karslake and the Hampstead Bindery to be nearly perfectly preserved over the years. (Inventory #: 4787)
$8,500.00 add to cart or Buy Direct from
Nudelman Rare Books
Share this item