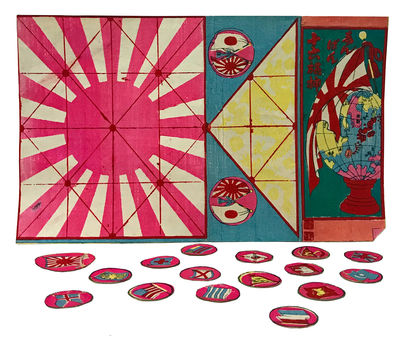 by [GAMES]
Japan: no publisher, late nineteenth century. Very striking imperialist version of the traditional Japanese game of jūroku musashi, "sixteen warriors," in which a great warrior (the benkei) squares off against sixteen smaller warriors (the musashi) on a grid. In this example, the benkei is represented by the Rising Sun Flag, the war flag of imperial Japan, a design which provides the primary pattern of the game board; the flag is also depicted covering the globe at far right. The smaller warriors are represented by the flags of other nations, including China, Korea, Siam, France, the United Kingdom, and the United States. Kirazuri, a decorative technique in which mica is crushed and added to pigments for printing, is featured on the vibrantly colored board and playing pieces. Text in Japanese. A remarkable artifact of Japan's emergence as a modern imperialist power. Oblong folding game board, color-printed on card, measuring 7.5. x 12 inches, with one large circular playing piece (representing Japan) and fifteen smaller discs (representing other nations). Scrap of writing paper affixed to verso of board, presumably as a pocket for the playing pieces. Lacking one smaller disc. Occasional stray smudge to board. (Inventory #: 1002679)
$750.00 add to cart or Buy Direct from Honey & Wax
Share this item
Honey & Wax Booksellers
Offered by