The Heavenly Cupid or The True Paradise of Loves. 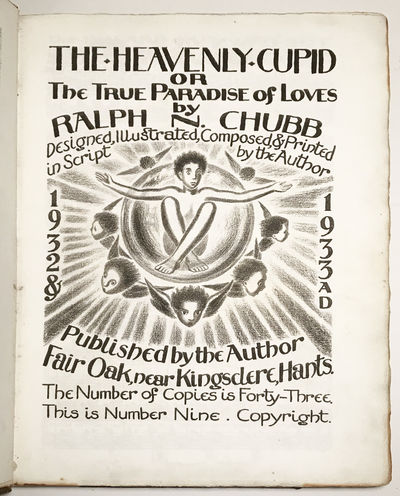 by CHUBB (Ralph)
CHUBB (Ralph)The Heavenly Cupid or The True Paradise of Loves.Privately Printed by the Artist, Fair Oak, near Kingsclere, Hants., 1934.One of 43 copies (#9); 30 for sale, each copy signed and numbered; the first 7 copies issued hand-colored. Reid A10a
96 lithographic illustrations by Chubb to accompany his printed lithographed script text with signed and dated frontispiece. Folio, original half green morocco with dark green corduroy sides. Except for some binding scuffs, a very good copy.
Ralph Nicholas Chubb (1892-1960) was an English poet, printer and artist, heavily influenced by Blake and the Romantics with a highly personal and sexually revolutionary mythology. He privately produced 17 works entirely by his own hand in very small print runs working quietly first from Curridge in Berkshire and then from Kingsclere in Hampshire. Part of his mythology was Chubb being the prophet and herald of the saving of England by a boy god. This eternal Boy-principle of the is announced as The Third Dispensation in The Heavenly Cupid as an aside to the chapter entitled 'Supernature: The Phoenix is Born Again': "[Man is the eternal only-begotten son of God his father & Nature his Mother, who is the emanation of God. Both are all love for him. But he is rebellious because he sunders his two parents in his mind instead of uniting them in his heart. The reconciliation of the child with his parents & of the parents together by the child is foreshadow'd in the following prophecy of a THIRD DISPENSATION.Out of the suffering & travail of the nations. This heavenly child emerges in Eternity. It has been my happy privilege to see his star in the East, & it is my heavenly commission to herald his coming on the earth.]" Some see his work merely as homo-erotic pederasty and some of his books were destroyed. Despite this he continued with his work, personal philosophy and worship of the aesthetic of the youthful male form: "the last act of creation in the Old Testament is the woman, Eve. But the final crowning act of creation in the new testament is the Divine Boy". However, it is deeper than that and is tied in with the dreadful loss of innocent young life he saw resulting from WWI in which many of his friends died. The loss of beauty caused him to be driven to put his vision of this beauty into art. Roderick Cave likened him to Blake as a self-proclaimed prophet and mystic and believed that he was a complete artist living in his own imagination. Still this particular work is one of his most notorious with his schoolboy corduroy binding and the numerous images of naked, albeit seemingly innocent, young men. It did create a scandal and this particular style of binding was not repeated. It is important that we see past certain censorship of today and understand the bravery of Chubb's work. He was a gay man opening expressing his sexuality at a time when this was both unacceptable and illegal. His books were kept in the 'private case' in the British Museum. Title: The Heavenly Cupid or the True Paradise of ...
Printed by the Author 1932 & 1933, Fair Oak, near Kingsclere, Hants. (Inventory #: BBO18)
$7,500.00 add to cart Available from Battledore
Share this item