The Confectioner Guide, and Ladies' and Housekeeper's Instructor: being a grand display of pastry, in a variety of forms: also confectionary; Iceing, candying, preserving, jelly-making, sugar-boiling, colouring, &c. &c. in the first of the art. by James Wallace, late of Philadelphia 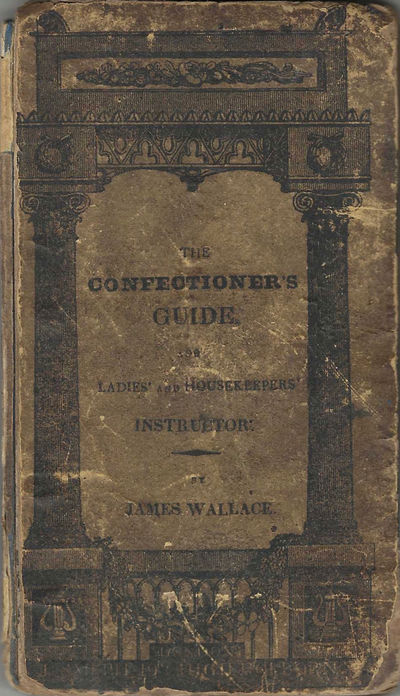 by Wallace, James "late of Philadelphia"
[London: the author;] J. Smith, Printer, 193 High Holborn, 1826. Duodecimo (14 x 8 cm.), v, 144 pages. Index. Publisher's advertisements on rear board. Date from author's statement in preliminary "Advertisement", "London, July 1st, 1826". Perhaps a first edition, but sequence yet to be established, of this confectioner's manual by an author, "Late of Philadelphia". We know of five printings between 1826 and 1831 (in London, Bungay, and Leeds); the publication sequence remains unclear, as all copies we've been able to examine contain the same author's advertisement implying this issue is a response to the successful sale of an earlier printing. We have located no issue preceding 1826, nor has there surfaced an American issue of this work by a James Wallace, confectioner; no information shedding light on the author's connection to Philadelphia has surfaced. This begs the question of whether this is the work of an American author, and therefore an unrecognized early American cookbook, (but one published in London, instead of within the U.S.) Regardless of the author's origins, the recipes lean decidedly English, and include cakes and ginger breads, as well as puddings, custards jellies and preserves, along with the more expected candies. With separate instructions for sugar boiling and coloring. ~ Text block is sound and clean. In original publisher's printed, paper-covered boards; publisher's advertisements to rear panel. Binding soiled and edge worn and heavily chipped at the spine. Good. Ownership inscription to final leaf (page 144), "Thomas Baron, Bradshawgate, Great Bolton". Baron was a tobacconist in Bolton, northwest of Manchester. [OCLC records no copies of this J. Smith issue (and seven copies combined of all later printings); Oxford, page 159 (citing the C. Cooper, Leeds imprint of the same year, but adding the author's address "Theobald's Road" to the imprint); not in Bitting, Cagle or Vicaire]. (Inventory #: 7245)
$900.00 add to cart or Buy Direct from
Rabelais: Thought for Food
Share this item